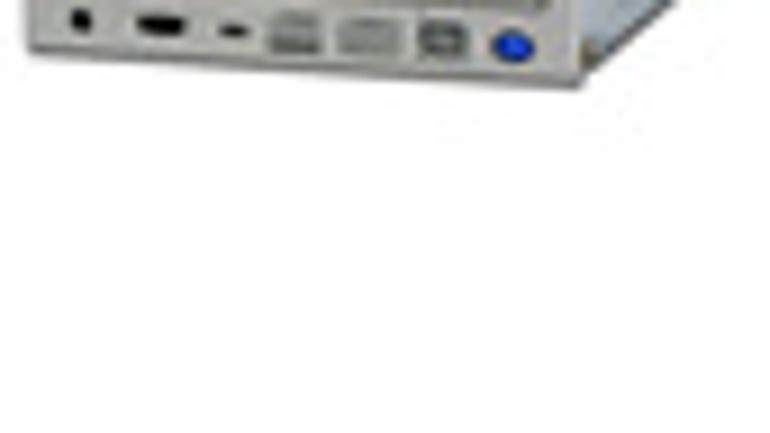 HP's DVD-Writer DVD200i could be the DVD-movie-burning solution of your dreams. A speedy, second-generation DVD+RW drive that can now write to DVD+R recordable discs as well as older DVD+RW, CD-R and CD-RW media, the DVD200i is an all-in-one optical drive par excellence. The new DVD+R media's compatibility with DVD-ROM drives and movie players also looks promising, although we're still testing a variety of discs to make sure.

HP ships the £349 (ex. VAT) DVD200i, which is compatible with Windows 98 and later, with a healthy collection of documentation, software and accessories. The paperwork includes a quick-start poster, a colourful software manual and a troubleshooting guide. HP also packs an audio cable, an 80-pin IDE cable and mounting screws, as well as one DVD+R and one DVD+RW disc in the box. The DVD200i is no more difficult to install than any other internal drive -- the process is only daunting if you're afraid of opening your computer. One minor gripe: the drive's emergency-eject hole can be accessed with only the smallest of paper clips -- very frustrating if you don't have any handy.

But performance is only one criterion for judging DVD recordable drives, especially if you plan to burn home-movie discs. A pre-burned DVD+R provided by HP worked in every player we tested it in, including some real antiques that wouldn't play DVD-Rs. This initial success is promising, but it's still early in the DVD+R game: we'll continue to test this disc and others we've burned ourselves in as many drives and players as possible.

HP provides a one-year warranty on the DVD200i drive. The company's Web site includes a list of DVD+RW-compatible DVD-ROM drives and players, but so far lacks a list for DVD+R. For those of you stuck with older DVD100i drives that can't use DVD+R media, HP’s offers an upgrade program: send in your old drive along with £91 and a pre-June 10 receipt before July 30, and you'll get a new DVD200i drive complete with software. For more details, look here.

HP’s DVD200i is an impressive performer and an excellent choice as a backup drive. Furthermore, DVD+R media may prove to be the most compatible DVD-recordable format. If you want or need a DVD burner today, a DVD+RW drive such as the DVD200i is a sensible choice.