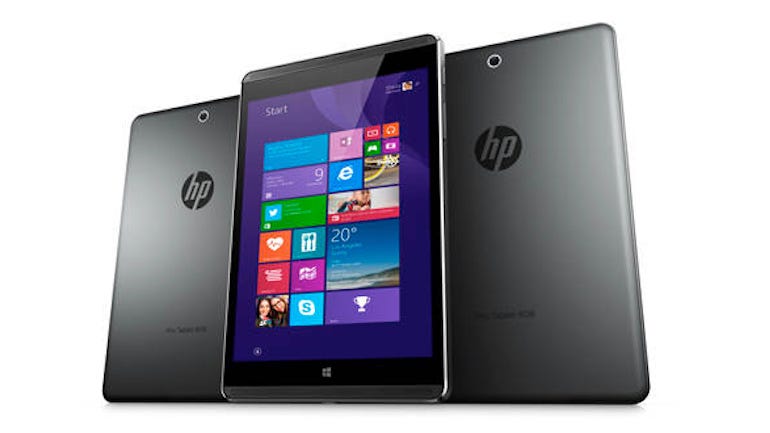 Windows tablets don't enjoy the same popularity as Android tablets or Apple's iPad, but that doesn't stop the big players releasing them. When we looked at Lenovo's ThinkPad 10 recently, we found it somewhat over-priced and under-powered. Has HP got the mix right with its new Pro Tablet 608 G1?

Build quality is solid, with a Gorilla Glass-protected screen and a metal frame that resisted our attempts to bend it. The tablet's plastic backplate might be liable to scratches, though. A silver frame around the front edge is the only 'design' feature on an otherwise sober black chassis.

The short edges house grilles for the tablet's stereo speakers. Sadly the sound quality that emerges from these is not impressive -- certainly not as good as the lengthy grilles lead one to expect. The audio is tinny and maximum volume is not very loud. You'd struggle to use the Pro Tablet 608 G1 for workplace presentations.

Sound may be disappointing, but vision certainly is not. The Pro Tablet 608's 7.9-inch screen is one of its most impressive features, delivering sharp images with good viewing angles. The screen resolution of 2,048 by 1,536 pixels is high, its 326ppi pixel density matching the 7.9-inch iPad Mini 4 and the 8.9-inch Nexus 9. This resolution means text is rather small, and you may need to change some Windows 10 settings to avoid struggling with fingertip accuracy and text size in some situations.

The only downside is the screen's reflectivity, although this is less of an issue with a tablet than it is with a laptop because it's easier to adjust the screen angle to compensate. We also felt that the maximum brightness level could be brighter.

The screen has a digitizer layer, which means you can use a stylus -- but this only comes as standard with the two most expensive models, which cost £483 and £497 (ex. VAT) respectively.

The screen's 4:3 aspect ratio will suit anyone who spends time browsing the web or reading text in portrait mode. We also found it ideal for holding the tablet in two hands and tapping away at the on-screen keyboard -- something that would be harder on a wider 16:9 screen.

There's a minimal selection of port and buttons, including a single USB port -- although it is USB-C. This handles charging as well as supporting external devices. It's nice to see USB-C supported, but given its relatively new status HP arguably should have provided a USB 3.0 converter in the box.

Two caddies cater for MicroSD card and Micro-SIM cards. Mobile broadband with GPS is supported on all but the entry-level model. There's also a headset jack.

The bottom long edge has a docking connector, which you can use to accommodate the £157 (ex. VAT) Portable Tablet Dock. This adds HDMI, Ethernet (RJ-45), USB and audio ports to the setup.

Wi-fi (802.11ac) and Bluetooth 4.0 are supported across all eight models, and most also support NFC.

Internal storage may prove problematical. You can have up to 128GB of internal eMMC storage, but that configuration is only available in the two most expensive models. You'll have to settle for 64GB in the remaining configurations.

The same quad-core Intel Atom x5-Z8500 processor is used across the board. Running at clock speeds between 1.44GHz and 2.24GHz (via Turbo Boost), it supports a maximum of 8GB of RAM, although HP provides 4GB in all but the entry-level model, which comes with 2GB.

Even with the 4GB in our review sample, we found the Pro Tablet 608 a little sluggish: in everyday use we became a little frustrated with the (short) waits for the screen to reorient as we changed the device's orientation or opened up apps. Our review unit ran Windows 10 Pro.

HP rates this tablet's 21Wh Li-polymer battery as good for up to eight hours' life. Using the tablet for mainstream tasks like document creation/editing and web browsing, we found that the battery indicator reduced from 93 percent to 79 percent over a two-hour period. Given that this tablet is most likely to be used as a secondary device, you should feel confident that it'll last through a working day without requiring a recharge.

HP's Pro Tablet 608 G1 is a compact and well-built Windows tablet with a high-resolution (326ppi) 7.9-inch screen. The entry-level price (£368 ex. VAT for 2GB RAM, 64GB of storage, wi-fi-only) is on the high side (an equivalent-spec iPad mini 4 costs £332.50, for example); adding memory, storage, mobile broadband and a docking station will quickly boost that price.