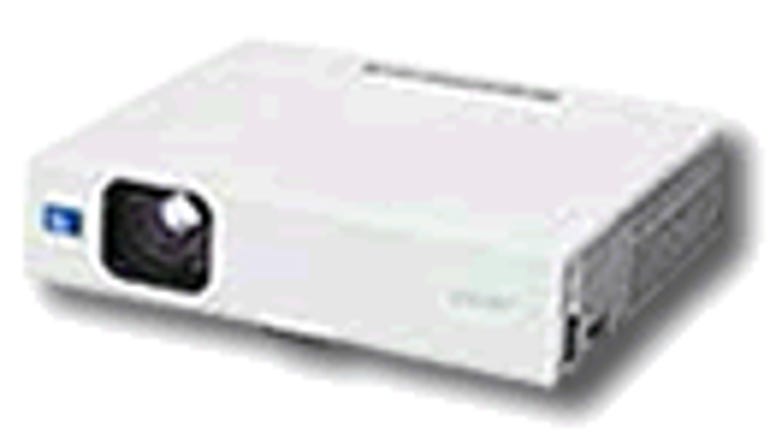 As a direct replacement for the VPL-CX75, the CX76 inherits most of its specification from its predecessor. At 2.9kg it’s slightly overweight for the sub-2kg ultraportable category, but is light enough to be carried around the office or in a shoulder bag without too much difficulty. Its XGA (1,024 by 768) resolution is pretty standard in its class, while its 2,500 ANSI lumen brightness, although not earth-shattering, clearly raises it above the entry level for today's business projectors.

Housed in a smart white casing with silver 'soft touch' buttons, the VPL-CX76 has a functional yet expensive feel, and is supplied with a full-size remote control rather than a fiddly credit-card-sized affair. You also get a rather posh-looking laser pointer-cum-presentation slide-changer that will help to make you look professional.

This projector is very simple to operate, with Sony’s automatic setup features present in full force. Turning on the power causes the built-in lens protector to retract -- there’s no lens cap to lose -- and the motorised tilt mechanism to raise the projector to the height last used. Auto input search then finds your PC or video connection and displays the image, which is then automatically adjusted for focus, vertical keystone and pixel alignment. Manual settings include a horizontal keystone adjustment that allows you to project off-centre from the wall or screen you’re using. When the power is removed, the internal cooling fans continue to blow until the lamp has cooled. This means you can switch off and go without the usual wait before unplugging the projector.

The VPL-CX76 uses a triple LCD imaging system bearing the '3LCD' logo. The relatively new 3LCD Group is formed of six projector manufacturers and headed up by Epson, from whom the 3LCD logo is licensed. This logo is designed to promote the advantages of LCD technology over competing technologies such as DLP. However, the use of three LCD panels in a projector is far from new, so don’t be fooled into thinking the 3LCD logo is promising you a new, cutting-edge technology.

Nonetheless, we found the image quality of the VPL-CX76 to be very good, with a bright image and rich colours. Contrast is fairly poor and rated at only 350:1, but brightness is much more important than contrast ratio for business presentations -- especially when the office lights remain switched on. If you need still more power, the very similar VPL-CX86 is available with an extra 500 ANSI lumens of output.

The VPL-CX75’s distinguishing feature was its support for Sony’s AirShot wireless technology which, in the CX76, is upgraded to version 2. With Airshot v2 you can project your presentations wirelessly from any of up to 100 PCs, making it easy to switch between presenters without the need for fiddling with cables. You can also display the output from a single PC on up to five projectors. Version 2 also claims 20 per cent faster connection and transfer speed over version 1.

The VPL-CX76 is supplied with a USB 802.11g wireless network adapter (which also doubles up as a USB memory key) and a small CompactFlash-sized wireless adapter for the projector itself. The supplied software then makes it easy to set up a wireless connection between your PCs and the projector. It will automatically search for available projectors on startup. All that remains is for you to double-click on the icon that corresponds to your selected projector -- you will then find your PC's desktop projected surprisingly quickly.

If you already have a wireless network, then the VPL-CX76 can be configured to connect to an existing wireless access point with full WPA and WEP support. You can also use SNMP management and configure the projector to send automatic email alerts in the case of system errors or warnings.

Built-in Memory Stick support enables you to download slideshows and presentations onto removable media for presentation without a connected computer. JPEG images and MPEG video files are supported, and the included software can convert from other image formats.

With many different ways to connect and excellent image quality, the VPL-CX76 is capable of very slick presentations -- especially when using multiple presenters using their own notebooks or memory cards.