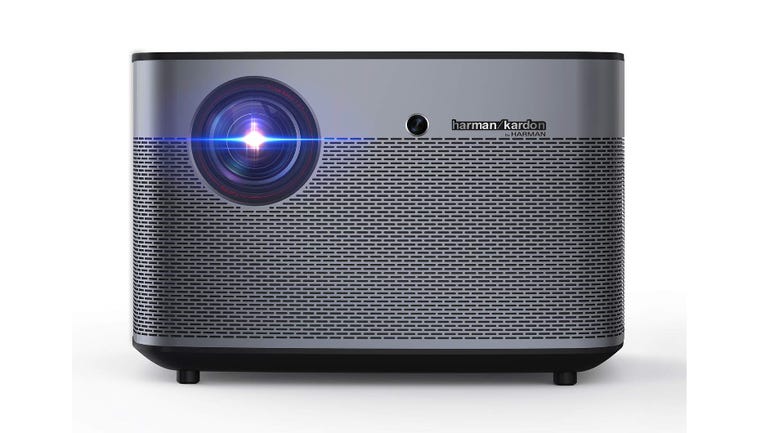 It is quite a large solid boxy-looking projector with all the control buttons at the rear top face and a range of ports at the bottom of the rear face. There is also a remote control.

To pair the remote control with the H2, turn on the projector, press and hold 'Return' and 'Home' on the remote until the power button flashes.

The H2 is more expensive than the H1 (you can get a 15% discount up to the end of May at the moment with the code XGIMIZNET via this link).

The H2 has 1350ANSI lumen instead of 900 on the H1. Its speakers are 16W instead of 15W. Unlike the H1, the H2 has auto focus, an automatic lens cap cover, and automatic keystone. It also has motion compensation for fast action video.

Inside the H2 there is an Mstar 838 A53 cortex CPU. It has a Mali T820MP3 GPU, 2GB RAM, and 16G internal storage so you can load a movie into file manager and watch it directly from the H2.

You can pair the projector with game consoles such as XBOX and PS2, or insert a USB in either its USB 2.0 or 3.0 ports

The H2 projector uses Bluetooth and dual-band Wi-Fi to receive transmissions and has an HDMi 1 ARC or HDMI 2 port if you are obsessed with perfect images.  It even has a LAN port and a 3.5mm headphone jack for immersive experiences.

The home screen is basic – and controlled by an air mouse on the remote – which disappears quickly if you do not use it. You can configure all the settings you need from the remote.

I downloaded the Android app – which, when I eventually managed to connect the app to the H2, gave me a lot of extra functionality.

I could mirror the mobile screen – great for playing YouTube videos from my phone. I could also  transfer any of my local resources from the phone to the H2 and take a screenshot of the H2 display or transfer files to the H2.

I could also change the input from the clunky onscreen keyboard to a stylus. None of these features are mentioned in the user guide – which is basically a quick start guide to the buttons on the device.

I really like the fact the XGIMI has an in-built camera that focuses the projector automatically and adjusts the keystone – if you can find the auto focus button on the remote control (it's at the bottom edge of the remote). Focusing is really quick too with no more fiddling around with the lens.

Adjusting the image size is easy too with the intelligent zoom. I found the autofocus to be brilliant, no matter what the distance is from the screen. Once you have set up your screen, you can use stepless zooming to maximise the image size to the screen.

The H2 is not a true 4k projector – but it works well with 4k content although some of the colour saturation was a bit weak. Action shots are really clear due to the motion compensation feature in the H2.

I particularly like the fact that the keystone correction angles up to 45 degrees. This means that you no longer need to have the projector between you and the screen. You can angle the projector to the side and adjust the keystone to get a good image. I did have issues with the automatic keystone effect.

Perhaps this was because I had situated the projector too far to the side of the screen. However, I struggled to get the perfect keystone even manually. I obviously need to become more familiar with the settings on the H2.

Another thing I disliked was the user guide. The design gurus have dictated that the font is a very pale grey and ultra small. Although there looks to be a lot of text, it is one line repeated in 18 languages - if you can see it!

The user guide is basic and unintuitive. There is no angle adjuster underneath the projector to slightly adjust the screen angle (I used a book). However, there is a screw thread for ceiling mounting -- or I could have used a stand such as the Vankyo tripod stand I reviewed in February,

I had expected a micro adjustment screw feature but I could not find one.

I loved the Harman Kardon speaker on the H2. Situated underneath the projector, this speaker has a flexible silicone cone that delivers really good sound as the cone vibrates.

It is loud too -- and easily fills the room. I suspect that for home entertainment you might wish to configure surround sound using a sound bar or similar.

The H2 is a top quality but costly projector if you have a small home office. For most small business uses, you might not find this is necessary – unless you want to watch the Game of Thrones battle again on the main screen in your conference room.

However, if you are looking to beef up your home theatre set up, the XGIMI H2 gives you a heck of a lot for your money – and is really worth the expenditure if you love the immersive experience of the big screen.