I was determined to to listen to every word.

Which I can't say was the case with some in the audience, who were chattering away while Google's head of Europe, the Middle East and Africa, Matt Brittin, was answering questions posed by Krishnan Guru Murthy of the UK's Channel 4 on stage at Web Summit in Lisbon, Portugal last Wednesday.

Brittin does the Google nice-guy thing better than most of the nicer guys at Google I've met.

He reeks of a certain sincerity. He wants you to believe that he represents Google's deep-seated decency.

Here, then, are five things I learned from trying to pay attention to a top Google executive, as the company navigates very difficult times.

Brittin seemed keen, whenever he could, to laud the fact that this controversial company was now holding hands with the web's creator.

After all, Google and Facebook are both involved in Tim Berners-Lee's new "contract for the web," which appears to be a pulsating pipedream to make the web a better place.

Asked how this could possibly work unless everyone on the web participated (I feel sure Vladimir Putin won't), Brittin didn't seem entirely sure. 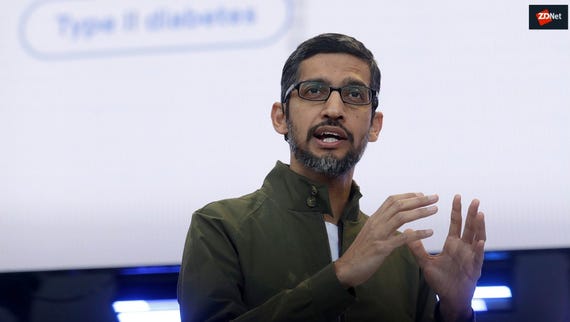 2. Google has a transparent culture.

It's all out there at Google. The company encourages dialogue among employees.

Brittin is in favor of Google employees transparently objecting to the alleged $90 million payoff to executive Andy Rubin, after he was accused of sexual harassment.

But no, despite the transparent culture, Brittin said he had absolutely no idea that Google had paid Rubin $90 million.

3. Google will respect the new rules.

Whatever rules politicians come up with, Google will respect them, said Brittin.

The company will pay all the fines levied upon it by the European Commission. Google will now be a "responsible innovator."

I worry, though, that when Google CEO Pichai was asked to visit Senate rule makers for a chat, he initially declined.

I worry, too, that respecting rules doesn't mean you won't still break them.

Somehow, I think back to the halcyon days of 2010 when Google was caught stealing Wi-Fi data. The company insisted, even then: "The engineering team at Google works hard to earn your trust."

You see, Google has always respected the rules. It's just that it hasn't always stuck to them.

Oh, and about that new, alleged Chinese search engine with censorship built in? Brittin said that isn't happening.

One assumes that would be as far as he knows.

4. Google Has a Renewed Energy In Its Mission To Know Everything You Say and Do.

Brittin spoke of a renewed energy in delivering Google's mission. That mission: "To organize the world's information and make it universally accessible and useful."

It's a complicated mission, that.

Asked whether the idea of Google being a sort of God-like, all-seeing, all knowing universal repository of all information about everyone was a touch, well, totalitarian, Brittin retreated to an interesting theme.

"Everything starts from you," he said. You must feel secure. You must have control of your privacy.

Is this the same Google that rolled over people's privacy like a dog rolls over an especially comfortable carpet?

Weren't users, in fact, prostrate and tied to the railway line as the Google Express roared right over them?

It never started from users. It started with getting as many users as possible to hand over as much information as possible without realizing that's what they were doing and Google selling that information to advertisers.

Humans, those short-sighted, short-term thinking sorts, took years to realize what was going on. They still don't know all of it.

5. Google has to be better at listening.

Brittin admitted, when his company was accused of talking a great game rather than delivering it, that it wasn't delivering it.

"We want to ensure that everybody is held to a higher standard," he said of his fellow Googlies. He explained that the everyday behavior of Google employees has to improve.

"We have to be better at listening," he said.

But if it's true that the Google way has always been about putting users first, how did Google manage that without listening to them?

So many products -- bless you, Google Buzz -- were shipped because engineers at Google, rather than real, human users, thought they were cool.

And how was forcing everyone onto the lamented, lamentable Google+ putting users first?

As I left the auditorium, I realized what Brittin had surely meant. He wasn't really talking about listening to users.

He was talking about Google being better at listening in to users.

Google plans to show full-page warning for sites that fail to list all mobile subscription information in a proper and clearly visible manner.

After thousands of employees around the globe staged a walkout to protest the handling of sexual harassment cases, Google is reforming its policies.

Join Discussion for: 5 amazing things about Google I learned from...