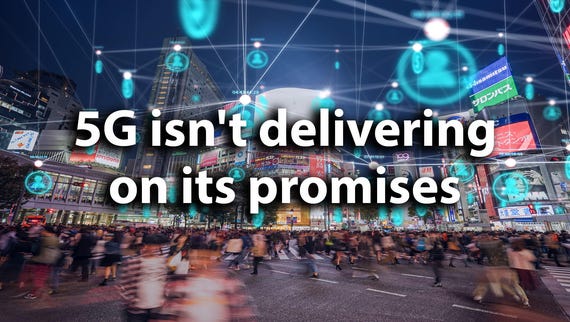 5G isn't delivering on its promises, and smartphone users are noticing
Watch Now

Attending work meetings remotely as a 3D hologram through smart glasses, or watching a football game from the best seat in the stadium while chatting with friends from the comfort of your own living room: when it comes to pitching how 5G connectivity could add some spice to users' lives, there certainly is no shortage of imagination.

But now, those promises are taking too long to become a reality – and as a result, consumers' interest in 5G is slowing down, shows a new report from Swedish telecoms giant Ericsson.

After surveying 1.3 billion smartphone users in 26 countries, Ericsson has concluded in a new report that while 5G uptake is still increasing, pressure is mounting on providers to start delivering services that are as innovative and unique as originally hoped.

Globally, across all the markets surveyed by Ericsson where 5G commercial networks are available, an average 4% of consumers own a 5G smartphone and have a 5G subscription. In the UK, an overwhelming 97% of respondents are yet to embrace next-generation connectivity.

This is partly due to the lack of clarity in the marketing of 5G, which has confused customers as to what the technology is and what it can offer. Heavy tech jargon and misinformation campaigns have in some cases even put users off entirely from planning to upgrade.

For the few who have switched to 5G networks, however, the experience overall seems positive, with better levels of satisfaction recorded compared to users connected with 4G LTE.

Perhaps as a reflection of 5G's capabilities, Wi-Fi usage among those who have upgraded is reducing. A quarter of respondents, said Ericsson, have either decreased or stopped using Wi-Fi after switching to 5G.

Especially in the context of the COVID-19 pandemic, which saw record-high usage of home broadband, users seem to rely on better-quality 5G networks as a backup when performance issues arise with saturated Wi-Fi connections.

But as useful as 5G connectivity might be in this scenario, fast and reliable access to the internet won't exactly cut it as the killer app that will convince more users to get on board with the technology. Not the least because, in many cases, consumers are already content with the speeds offered by their home Wi-Fi or 4G connection.

Ericsson found that in South Korea, for example, respondents are even less likely to be satisfied with 5G than they are with 4G – a finding that the company believes is partly due to using superior 4G and home Wi-Fi services as a benchmark.

To make the consumer case for 5G even harder, in most parts of the world broadband connectivity is only set to improve: in the UK, for instance, the government has started upgrading homes to next-generation gigabit speeds, as part of a £5 billion ($7 billion) pledge to bring faster internet access to the whole of the country before 2025.

In this context, advertising 5G as a way to achieve faster speeds won't be enough to win consumers' favors. "5G is not a sought-after feature," Paolo Pescatore, analyst at PP Foresight, and who did not participate in the research, tells ZDNet. "For now, there is no significant demand for 5G as it is not addressing a problem."

Case in point: Ericsson found that 70% of 5G users are frustrated at the lack of availability of innovative services and new apps.

The technology is typically used for services such as music and video streaming or gaming. Those applications are highly popular: according to the report, early adopters of 5G are spending an average of two hours more on cloud gaming per week compared to 4G users, and they are also streaming HD music for over an hour more.

SEE: The future of wearables: Why your smartwatch could soon be your doctor's favourite gadget

But these use cases are not convincing enough, said Ericsson, urging providers to move beyond existing services towards applications that create a sense of novelty and exclusivity for those who have upgraded to 5G.

"Ultimately, 5G remains in its infancy and the technology has yet to achieve its full potential. New super cycles like 5G offer providers a once-in-a-lifetime opportunity to enter and steal market share in a crowded landscape," he continues.

Ericsson identified various services that consumers are hoping 5G will offer, ranging from improving productivity and creativity to developing new ways of connecting and socializing, through inspiring feelings of thrill, surprise and discovery.

Beyond marketing gains, the financial benefits of meeting consumer needs are real. Respondents said that they are willing to pay 20% to 30% more for 5G plans that are bundled with relevant digital services. In the UK alone, five million smartphone users could take up 5G in 2021 if users' requirements are addressed, estimates Ericsson.

In addition, providers are benefitting from a favorable context, as smartphone manufacturers widely switch to producing 5G-enabled devices. "Users still desire the latest and greatest devices," says Pescatore. "Therefore, by default sales of 5G-ready devices will continue to increase. This in turn will migrate users to 5G and drive engagement."

The iPhone, for instance, remains a core product that will drive 5G adoption and provide a boost for the entire industry, says Pescatore.

And other brands are rapidly catching up. Analyst Gartner expects that 2021 will see 1.5 billion devices sold around the world, of which more than a third will be 5G-enabled devices. By the end of the year, analysts expect that consumers will be able to get their hands on 5G smartphones for $200, which will further contribute to expanding the market.

Ericsson, for its part, forecasts that there is potential for at least 300 million consumers globally to become 5G subscribers in 2021. It is now up to service providers to seize the opportunity and articulate the merits of 5G to users that are yet to be convinced.

Join Discussion for: 5G smartphones have arrived. But for many,...