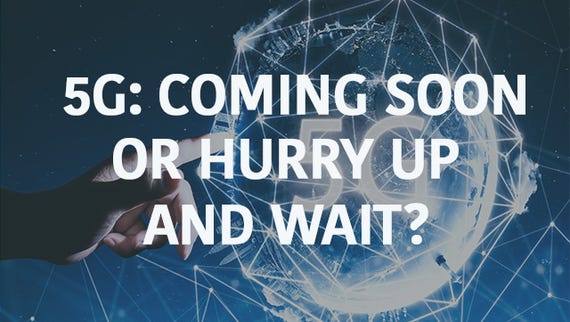 5G: Coming soon or hurry up and wait?
Watch Now

The Australian government has announced the competition limits of its 5G spectrum auction in the 3.6GHz band, directing the Australian Communications and Media Authority (ACMA) to impose an allocation limit of 60MHz in metro areas and 80MHz in regional areas.

Such limits would impact carriers that already have holdings across the 3400-3700MHz band, the Department of Communications said.

This will "allow for a competitive auction process while preventing any one bidder from acquiring an amount of spectrum which could preclude other telcos from rolling out 5G networks", according to the government.

"The next generation of mobile services, 5G, will deliver significantly faster mobile data speeds and allow for millions of new devices to connect. The 3.6GHz band is recognised internationally as a key band for telcos to roll out new 5G networks," Communications Minister Mitch Fifield said.

"These auction limits promote competition in the telecommunications industry while ensuring this scarce spectrum is put to its highest-value use."

The department said the limits were set following consultation between the ACMA and stakeholders.

The ACMA had in May released detail on how it will auction off the 3.6GHz spectrum later this year to mobile telecommunications providers, which will use the band to launch 5G services.

"We are making spectrum available as early as possible so that all Australians can benefit from these new technologies. But we recognise the 3.6GHz auction will require incumbent operators in the band to make some changes," ACMA Chair Nerida O'Loughlin said at the time.

The ACMA is proposing to auction the 3.6GHz spectrum off online using an Enhanced Simultaneous Multi-Round Ascending auction format, with an application fee of AU$10,000.

On its Draft allocation instruments for 3.6GHz band (3575-3700MHz) metropolitan and regional lots auction: Consultation paper, the ACMA sought feedback on whether the 3.6GHz spectrum licences should commence as soon as possible after being auctioned off, or whether they should commence at the end of the two-year allocation period for metro areas; and whether it should amend the Tax Determination to include an annual licence tax rate of AU$0.0039/MHz/pop for the 3.6GHz band.

It also sought stakeholder views on its proposed auction rules; draft marketing plan with special regards to geographic lot configurations and multiple lot categories in Perth; and the proposal determine tax amounts for 3.6GHz spectrum licences based on total spectrum of 125MHz at a base amount of AU$69,180.

The ACMA also sought comment on introducing planning arrangements for frequency coordination and licensing of point-to-multipoint systems in the 5.6GHz band to support the transition of incumbent 3.6GHz users to the higher band, and to "protect existing BoM [Bureau of Meteorology] radar services and make provision for additional radar services in future", the ACMA chair said.

"We will be working closely with wireless internet service providers, satellite operators, and the Bureau of Meteorology up to and well beyond the auction process to address their concerns," O'Loughlin added.

Her comments followed BoM earlier in May saying moving wireless providers to the 5.6GHz band could impact weather satellites across most of the nation.

"The Bureau of Meteorology is concerned the reallocation of Wireless Internet Service Providers (WISPs) to the 5.6GHz band could interfere with existing radars and constrain future expansion and reconfiguration of its radar network," BoM said in response to Senate Estimates Questions on Notice.

The ACMA had released its five-year plan for spectrum allocation in October alongside "a range of mitigation measures" for incumbent users in the 3.6GHz band, including "a commitment to developing arrangements for site-based wireless broadband services in the 5.6GHz" band, support for ongoing access to spectrum, and identifying earth station protection zones on Australia's east coast.

This followed arguments from incumbent wireless ISPs and satellite groups that the spectrum should not be taken away from them and given to mobile telcos.

In March, Communications Minister Mitch Fifield then announced that current services in the 3.6GHz band will have up to seven years to vacate in regional areas, and only two years in most capital cities.

The federal government's 5G policy paper was released in October, announcing that the ACMA would bring the 3.6GHz spectrum band for 5G use to auction in 2018, followed by millimetre-wave (mmWave) spectrum in 2019.