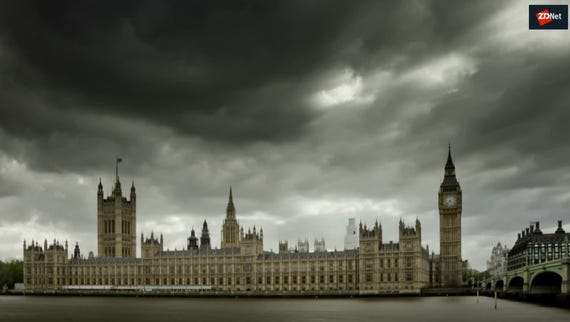 While once a remote possibility, the chance -- or rather, the risk -- of a no-deal Brexit seems to be increasing. The UK government has earmarked £2 billion for no-deal Brexit planning, has told businesses to increase their contingency planning, and is sending out 140,000 letters warning them to get ready.

A no-deal Brexit would mean the UK leaving the European Union without any agreements surrounding continued trade with the remaining 27 countries and 450 million people.

When the Conservative government activated Article 50 in March 2017, formalising its decision to leave the EU, politicians had two years to come up with a deal to create a transition period. This would allow the UK and EU to continue many of the arrangements (like police cooperation and data transfers) needed for the UK's economy to run smoothly outside of the EU. Without that agreement the UK simply leaves the EU abruptly, leaving government and businesses potentially scrambling to work out what happens next.

The UK's five largest business groups have warned that industry has been "watching in horror" as the UK seemingly heads towards a no-deal Brexit.

"Businesses of all sizes are reaching the point of no return, with many now putting in place contingency plans that are a significant drain of time and money. Firms are pausing or diverting investment that should be boosting productivity, innovation, jobs and pay into stockpiling goods or materials, diverting cross border trade and moving offices, factories and therefore jobs and tax revenues out of the UK," they said.

Tech companies have all of these worries and more.

"We've been pretty clear and consistent that no deal would be a very, very bad thing for the tech sector: there are a number of things right across the sector which become really difficult in the event of a no-deal, some of which are frankly unsolvable," says Giles Derrington, head of policy at industry group techUK.

For tech companies, the worst-case no-deal Brexit could see data flows between the UK and Europe cut or significantly curtailed, major difficulties with recruiting staff from Europe and sending staff to Europe to work on projects, problems with importing products and spare parts, plus a generally worsening economic situation.

In fact, the impact of a potential no-deal Brexit is already being felt. Larger tech companies are spending a lot of time figuring out their response to Brexit and are putting in place or triggering various contingency measures. Meanwhile, smaller businesses don't necessarily know where to start or what the implications of a no-deal might be, and don't have the time, money or resources to deal with it anyway.

Many firms will simply find it impossible to plan for a no-deal Brexit, says Nigel Driffield, professor of strategy and international business at Warwick Business School. "They will not have the cash flow to stockpile components or other inputs, and will not be able to train new staff in the seemingly unthinkable event of large numbers of EU staff leaving."

For many larger firms, December was the last cut-off point for contingency measures -- and as a deal with Europe is still to be finalised, they are taking steps now on the assumption of a no-deal.

"While avoiding a no deal can be at the last minute, going right down to the wire, the actual preparations for no-deal can't go down to the wire: we really are in the thick of it," says Derrington.

Some tech companies have already moved significant back-office functions -- those involving European tax or customs, for example -- out of the UK. Others are using employee churn as a way to restructure: when a UK member of staff leaves they will hire someone within the EU instead.

Tech companies working in the finance industry have already applied for licences elsewhere in the EU and have set up offices and moved some staff already. Some big tech companies are stockpiling spare parts in case the ports seize up, while big banks have started to move their data centers out of the UK.

"There is certainly a sense that [companies] are spending a lot of time and a lot of money on things they wouldn't be doing if this wasn't going on, if there wasn't a serious risk of no-deal, and that is very frustrating. You are talking about peoples' jobs and livelihoods. It's not to the benefit of the businesses, but it's also not to the benefit of the country," says Derrington.

Some of the effects of a no-deal Brexit might seem trivial, but could be far reaching. Many contracts may have clauses that mention that a service will be provided from the EU. That will need to be changed to refer to the UK instead. While it might be a simple change, for a company with many clients that can add up to a huge amount of legal time and cost. It also risks clients deciding they want to renegotiate the deal as well. "Suddenly you are into quite crunchy and difficult business situations," says Derrington.

Flows of data and talent

Data is one of the biggest worries. The vast flows of data from and through the UK to Europe are just a standard part of doing business, whether that's EU customer data in a UK data centre or any other service. But in the case of a no-deal Brexit the legal basis for that transfer vanishes.

The UK has said that in the event of a no-deal it will declare the EU to be a legitimate place for UK citizens' data to go. That means data transfers from the UK to the EU would be acceptable: the problem is there is currently no agreement on EU-to-UK data flows.

Companies needing to send data to and from Europe would require their clients to add standard clauses to their contracts to cover data flows -- another expensive job for lawyers, and one which some European clients are also using as an opportunity to renegotiate deals.

The status of the staff is another big issue; about one in five tech workers in London is from the EU. The UK government has said that EU citizens and their families resident in the UK by 29 March 2019 will be able to stay and carry on working or studying as they do now. However, the same may not apply to UK staff working in the EU -- that will be down to the choice of EU member states. It could be that UK staff can only be transferred to Europe for a 12-month period, which would make it harder for UK companies to compete on projects for example.

Because the UK tech industry hires a lot of specialised staff from Europe, another concern is how immigration will be managed after a no-deal Brexit, which is still unclear.  This could have a significant impact on the ability of UK-based tech companies to hire the talented staff they need to grow.

For businesses selling into Europe there will be host of questions around the trading and tax regimes they have to apply. For small businesses that could mean understanding the VAT across all the different countries. "Suddenly the complexities, especially for small businesses, become quite significant; for them it's almost impossible to figure out where to start or what the implications might be," says Derrington.

And the benefits are?

It's hard to see many benefits of a no-deal Brexit to tech companies. The likely drop in the value of the pound could be beneficial to exporters by making their products cheaper, although if the ports grind to a halt they may not be able to deliver those products anyway.

Just under half of the UK's exports go to the EU, with just over half of its imports coming from there. The government's own figures suggest that a no-deal Brexit would leave the economy over nine percent smaller over 15 years. That in turn will reduce opportunities for tech companies selling their services into the broader business market.

The impact on the tech industry is not just of interest to geeks: it's one of the fastest-growing sectors of the economy and generates high-paying jobs not only for tech experts but also for the services industry that surrounds it -- lawyers and accountants, for example. The tech sector is worth around £180bn a year and about 800,000 jobs. Fishing, by contrast, which has been one of the industries regularly mentioned during the Brexit process, is worth about £1bn and the UK has about 11,000 fishermen.

The government also said it is putting 3,500 troops on standby in case they are needed. The NHS has said it is already planning to stockpile six weeks of medicines in case they can't be delivered due to up to six months of chaos at ports. In that kind of worst-case scenario, the troubles of the tech industry -- real though they will be -- will look trivial compared to the damage to the wider economy.

London's tech startups are booming, but their biggest challenge is just around the corner
London remains Europe's tech capital, but for how long?

Blockchain and bluster: Why politicians always get tech wrong
Politicians need to start taking tech seriously, especially when they want it to do the near impossible.

Brexit: A cheat sheet (TechRepublic)
Brexit throws up a raft of questions for tech companies about how Britain's departure from the EU will change how they do business. Find out how it'll affect you.

Brexit deal: Tech companies fear a 'lop-sided' compromise that will be bad for business
Internet of Things and other digital services could suffer under a one-sided deal, warns UK tech industry group.

Join Discussion for: 'A very, very bad thing': This is what a...