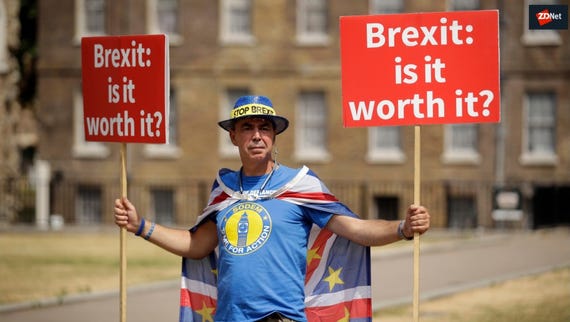 Brexit and tech: Why politicians are getting it wrong
Watch Now

Politicians and tech companies have a strained relationship at best. When they need a few cheap headlines, politicians will cheerfully bash tech companies for doing things like offering encrypted communications services -- while their colleagues use those very same services.

But then, when they want to look visionary, or simply don't have a real answer, politicians will make glib mention of cutting-edge technology and how it will solve otherwise intractable problems.

The UK government's White Paper on Brexit, published this week, is an excellent example.

Key to the smooth working of the proposed post-Brexit trade agreement is a new (and currently entirely theoretical) customs arrangement. Under this plan, when goods reach the UK, companies will have to pay UK tariffs if the goods are destined for the UK and EU tariffs -- which might be higher or lower -- if they are going further into Europe. If the final destination is unclear, then the higher tax is paid and then reclaimed.

All of this is complicated enough, and the paper acknowledges that a "phased approach to implementation of this model" will be required. Which is wise, considering the sorts of technologies the government has in mind.

"This could include exploring how machine learning and artificial intelligence could allow traders to automate the collection and submission of data required for customs declarations. This could also include exploring how allowing data sharing across borders, including potentially the storing of the entire chain of transactions for each goods consignment, while enabling that data to be shared securely between traders and across relevant government departments, could reduce the need for repeated input of the same data, and help to combat import and export fraud."

Yes, the UK government is apparently relying on blockchain, artificial intelligence and machine learning -- the three most-hyped and least-delivered technologies around -- to somehow enable this incredibly complicated trade system.

Arthur C Clarke's third law states that "Any sufficiently advanced technology is indistinguishable from magic". Be that as it may, the UK government should not be relying on it to make policy -- especially as, according to analyst firm Gartner, blockchain technology could "take a decade to become significant in business transactions".

There is also significant irony in the government appealing to the magic powers of technology to save Brexit when the UK's departure from the European Union is likely to cause significant pain to the country's growing tech industry.

Limits on freedom of movement are likely to make the UK a less attractive place for European entrepreneurs to set up in London. And even if they do, they will likely find it harder to attract staff with in-demand skills.

The UK government's current Brexit vision has little to say about trade in services, other than that the UK will have less access to European markets than before. That's a worry for the tech industry, because 80 percent of what it exports is in the form of services.

Part of the problem is that few politicians really understand or care about technology. Government technology projects regularly run over time and over budget, and still fail to deliver their design goals -- often because ministers fail to grasp the complexities involved.

Twenty years ago such an attitude towards technology on the part of our elected representatives might have been understandable, if unwise. Now it's positively dangerous: technology is one of the biggest drivers of change in society, because it underpins almost everything we do. It's one of the biggest sources both of threats and opportunities.

Issues from artificial intelligence to fake news to mass surveillance -- and yes, perhaps even blockchain -- require an informed and engaged political class, able to steer societies around potential risks and make the right decisions about how we should best employ these innovations.

For politicians, bashing tech companies to score cheap points and then hoping that immature technology will save them from self-inflicted problems is no longer an option.

Join Discussion for: Blockchain and bluster: Why politicians always...