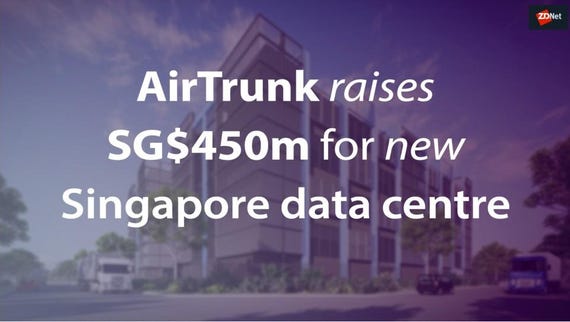 AirTrunk has announced its plans to build a hyperscale data centre in Singapore, having raised SG$450 million to kick-off the build.

The new Singapore development is part of AirTrunk's Asia-Pacific growth strategy and will see the Australian company boast three facilities in the region.

The Singapore facility will be built in Loyang, with the company saying its location is strategically near the Changi North Cable Landing Station, a key sub-sea internet landing station for international interconnection.

"The rapid growth of cloud and evolving needs of enterprises are driving demand for hyperscale capacity in the region. Singapore is a strategic data centre hub due to its economic and political stability and rich connectivity to Asia, the USA, and Europe," AirTrunk chief commercial officer and executive director Michael Juniper said.

According to the company, the new facility will be the largest neutral data centre in Singapore, with more than 60 megawatts of IT load, and is specifically designed for hyperscale cloud, content, and enterprise customers.

The facility will be serviced by multiple fibre paths and also boasts a dedicated high-voltage substation, AirTrunk said.

The Singapore data centre is set to be operational in mid-2020.

AirTrunk in August had announced the completion of a AU$850 million financing round to fund a major expansion of its Australian data centres in both Sydney and Melbourne.

Phase one of the build cost the company AU$200 million.

With a total capacity of more than 84MW of IT load across 34 data halls, the second local facility sits on top of 31,000sqm of floor space, comprised of 23,000sqm of technical data hall area and 8,000sqm of office and storage area. The company told ZDNet at the time it had invested more than AU$100 million into the facility.

AirTrunk claims the two Australian facilities will be the largest independent data centres in the Asia-Pacific region when completed, at 90MW and 84MW.

To be operational in 2022, the new facility will span 11 storeys and see the social media company invest S$1.4 billion (US$1.02 billion) in the country.

Its seventh such facility in Singapore, the data centre will be STT Telemedia Global Data Centres' largest in the country, spanning 27,000 square metres and touting a load capacity of more than 30 megawatt.