The online retailer is giving its Australian customers the chance to pick-up their parcels from self-service lockers or from the counter of a partner retailer.
Written by Aimee Chanthadavong on Nov. 19, 2019 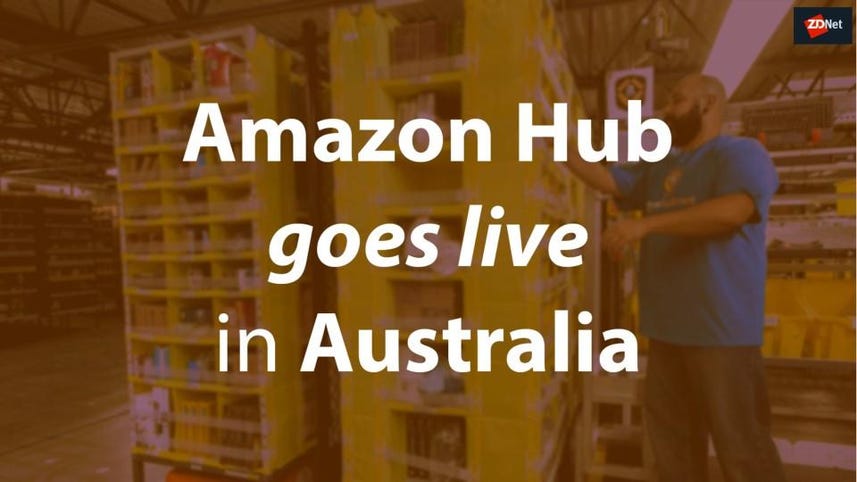 E-commerce giant Amazon has launched Hub in Australia to give local customers more control and flexibility over how their purchases from Amazon.com.au are delivered to them.

As part of Hub, customers can choose to pick-up their parcels from two types of pick-up points: Locker and Counter.

For Locker, Amazon has initially partnered with Commonwealth Bank of Australia (CBA), Victorian Authorised Newsagents Associations (VANA), and Stockland Shopping Centres to allow customers to pick-up their parcels from a self-service kiosk located at a partner location.

Meanwhile, Counter is a pick-up point that gives customers the option to receive their parcels in-store from partnering retailers. Victorian-based VANA has been named as the first participating retailer for Counter.

Speaking to ZDNet, Amazon Hub worldwide director Patrick Supanc, said the decision to launch Hub in Australia comes off the back of customers demanding for more control of when and where their package is delivered.

"One of the areas we've seen from customers both here in Australia, and in other countries around the world, is they tell us they sometimes like to have an alternative delivery option, aside from home delivery or door step delivery," he said.

"People live busy lives, they might live in a high-rise apartment building where door step delivery is challenging, they may be travelling, they may sometimes not want their spouses to see the package that is arriving.

"So, listening to these customers, we want to create alternatives for them to still receive their deliveries in a reliable, fast way but to a location other than their home."

Amazon Hub will initially be available in "urbans areas" of NSW and Victoria. Specifically, in NSW these include Linfield, Wetherill Park, and Baulkham Hills, while for Victoria, locations include Mornington, Glen Iris, Moonee Ponds, Glenroy, and Box Hill.

Supanc said while there'll be "dozens" of Locker locations initially available, there are plans to expand it to 100 by the end of the year, adding customers will have "hundreds" of Counter locations to choose from.

Delivery to an Amazon Hub location will come at no extra cost for customers and is available to all Amazon.com.au customers.

According to Supanc, there are also benefits for participating partners too.

"Our partners now have a new service and have a reason for customers to come back to your location. We're also introducing Amazon customers to that service, to that location, where our partners have a chance to convert them for additional sales. That foot traffic is important and that's something that will build quickly for those partners," he said.

The launch of Amazon Hub in Australia comes almost eight years since it was originally launched in the US.

On the point of other future plans for the company in Australia, Supanc said the company continues to be focused on competitive pricing and expanding its product offering on Amazon.com.au, which currently stands at over 125 million items across 29 categories.

"We're going to continue to grow that, so that's going to be an important part of our future. Our core as a company is really around price, selection, and convenience. Our Hub program is an example of convenience, but we're also thinking about price and selection every day," he said.

Australia now has Amazon Prime
The online retail giant has geared up for its Australian domination, launching its Amazon Prime service that offers two-day delivery and access to streaming, gaming, and reading services.

Amazon unveils .sg marketplace, two years after Prime Now launch
US e-commerce giant launches Amazon.sg with "millions of products", replacing the international selection on its Prime Now app in Singapore, but some customers say the local marketplace offers a smaller product selection than before.

After testing Amazon Go stores in Seattle, the tech giant makes plans to expand nationwide, as some fear for the loss of jobs due to automation.