Full Bio
Posted in Between the Lines on June 19, 2017 | Topic: Enterprise Software 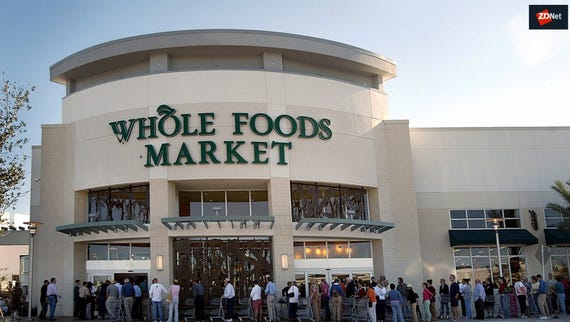 With Amazon online sales on one side and Walmart superstores on the other, retail has been getting clobbered for years. Now, the two giants are posed to begin a final battle that will change consumer sales forever.

Sure, Amazon will be happy with you walking into its stores and walking out with your goods without human interaction. This program, Amazon Go, is already in beta, and we'll soon see it in Whole Foods.

Cashier jobs? They're history. If Amazon Go takes off -- and no one's ever won betting against Amazon when it comes to retail innovation -- 3.5 million cashiers in the US will end up on the unemployment line.

But that's only step one.

The long-term plan will be to have Amazon's drones deliver your groceries to your door. Bigger deliveries? That's where Amazon's self-driving delivery cars step in. This quiet program has been working on the store-to-home delivery for over a year.

And all this will be co-ordinated over Amazon Web Services (AWS). The only people in the entire supply chain -- from the factory or farm to your door -- will be those who handle packing and moving. Eventually, they'll be replaced, too.

Walmart? It has seen this coming for years, and it's been fighting Amazon for just as long.

Unless you follow the retail business like a hawk, you might not know that Amazon was beating Walmart every day on its "Everyday Low Price" guarantee.

Walmart responded by calling in the major consumer suppliers -- from diapers to clothes to TVs -- with an offer they couldn't refuse: Either cut their wholesale prices by at least 15 percent off, or Walmart would limit their presence in stores and create its own branded products to compete with them.

Amazon, never afraid to cut sales margins by increasing volume, has responded by selling even more CRaP, an inside Amazon acronym for "Can't Realize a Profit" products.

Now, though, Amazon is coming after where Walmart lives in urban and suburban neighborhoods. The battle between giant retailers is on.

While Amazon wants to turn brick-and-mortar on its head, Walmart has been automated its supply chain and moving into online sales. Armed with open-source software such as the OpenStack cloud, Walmart is fighting Amazon on its high-tech turf.

Walmart has committed itself to the open-source software model. Its not just users. It has released mission-critical programs such as the application life-cycle management tool OneOps, as well as Electrode, the React-based application platform that powers Walmart.com, as open source.

Who will win? It's too early to tell. Both mega-retail giants have conquered their worlds; Amazon dominates online retail, while Walmart controls brick-and-mortar retail. In this new world, which combines both and transforms them with cashier-less shopping and automated local delivery, there's just no telling.

I can tell you, though, who will lose. The same companies that have been losing all along: All the other retailers.

According to Credit Suisse, over 8,600 brick-and-mortar stores may close their doors in 2017. Bebe, JC Penny, Sears, and Macy's. Get ready to kiss them good-bye. Malls? They'll be as quaint as vibrant downtowns.

At this rate, Credit Suisse sees more retailers closing down than ever before. And this, mind you, is before Amazon and Walmart really go after each other.

Clicks aren't going to just bury bricks. The new retail paradigm will transform everything you know about the shopping experience.

Join Discussion for: ​Amazon vs Walmart: It's on!