An AT&T salesman showed me the Galaxy Z Flip. Then he said don't buy it

It's not easy to find Samsung's new folding phone in stores. But when I did, it was a fascinating experience, with many nuances.
Written by Chris Matyszczyk, Contributor on Feb. 18, 2020 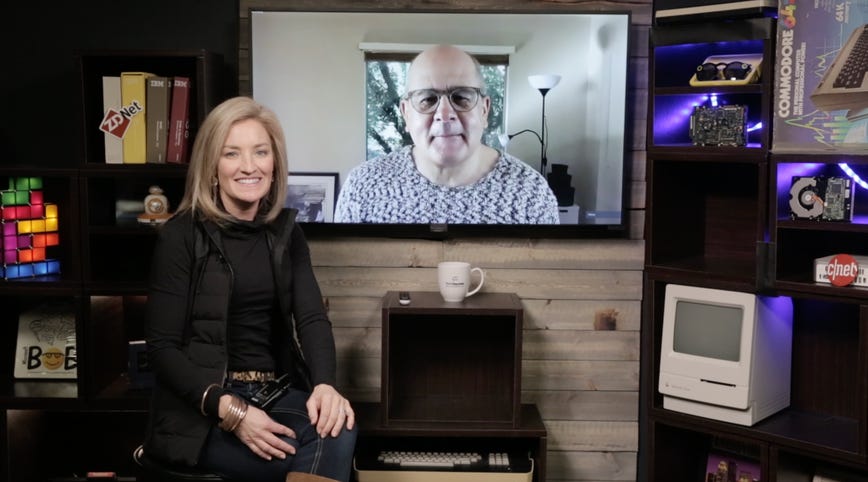 This was, after all, Valentine's weekend and Samsung had, with caring abandon, suddenly declared that the Galaxy Z Flip -- its new, sophisticated flip phone -- would be available at Best Buy, Sprint, AT&T, and Samsung Experience stores.

This promised to be a phone that could return the sexual allure that gadgets once offered insecure humans.

It couldn't be, though, that many phone stores would have it. So my strategy was to identify bigger stores in the hope of finding at least a little frisson.

This eliminated Sprint, as, well, I rarely see the brand other than in the lower levels of The Wall Street Journal. As for Samsung Experience stores, I'm sure I had that experience once -- around 10 years ago.

First, then, I hurried to a large Best Buy.

I approached a kindly man at the phone counter.

"Do you have Samsung's new folding phone, the Z Flip?" I asked.

"I sort of wanted to see what it was like in real life before ordering it."

"I'm really sorry," he said. "It's frustrating. We don't even have the Fold yet."

I sensed his annoyance that the store wasn't being well served by Samsung, thanked him, and mused that my search may be harrowing.

At AT&T, backflips. And a lack of conviction.

I next found a substantial AT&T store, wandered in, and looked around.

Within seconds, a very nice man offered to help. Fortunately, he not only worked there but had positive answers that made my eyebrows do backflips.

"Do you have the folding Z Flip?" I asked.

"Sure. We have a display case over here," he said to my surprise and led me over to the phone.

It was entirely enveloped in glass, but he opened the case and allowed me to hold it, unfold it, and even play with the apps on the screen.

This was a wonder I hadn't expected. Clearly, Samsung was making at least some effort to get this phone into customers' hands.

This particular device was a mirror pink color. Which seemed a touch insipid. Moreover, the rumors about the outside suffering from more fingerprints than would move CSI Miami to raptures seemed true. This was one smudgy little thing.

Opening it, however, showed that it's a solid, attractive and inventive phone. Folded, it's just a chunky little square. Open, it gives you enough screen space to do what you'd do with your usual phone, but satisfy your retro-modern credentials. After all, even Samsung says the Z Flip is a fashion statement.

Another true wonder is the ability to open the phone and keep it at any angle you choose. Just like my dreadfully oldy-worldy MacBook Air.

I offered admiring expressions to the salesman. He didn't seem quite so moved.

When I asked him what he thought, he furrowed his brow a little and said: "I wouldn't buy it. You just don't know how good it is."

What he meant was that with a brand new type of phone, you have less idea of how it might perform over a longer period. For him, the Z Flip was still a little too much of an experiment.

"But it feels really solid. You can see the little fold in the middle, but it doesn't look as if it's going to tear apart," I said.

I was turning into the salesman here.

"Yeah," he replied, with skepticism. "I want something bigger. More tablet-sized."

For him, perhaps, there's the Galaxy Fold -- at a definitely not-for-many-people price.

The salesman conceded the Z Flip's display was excellent and that he'd be fascinated to see what it would be like to take a call without opening the phone.

A little like holding a compact to your ear and talking at it, I guessed. And certainly more stylish than taking a call on your Apple Watch.

I sensed that even though he wasn't entirely convinced or convincing, he liked the Z Flip slightly more than he was expressing. I think I may have an idea why.

"So do you have any of these phones on sale right now?" I asked.

"It's not on sale yet, but we might get some on launch day."

"We never know if we're going to get the phones on launch day and we never know how many we'll get."

"That must annoy you," I said.

"Yeah. We never got any of the last iPhones, except the cheap one. The 11," he replied.

Again, then, I felt the frustration of store employees who don't want to disappoint customers by making promises they may not be able to keep.

Reports already suggest the Z Flip has sold out. Which, for Samsung, is surely the point. You can't have too many of a new, alluring fashion item around. Make them beg for more. For the salespeople, that's just an irritant.

Still so many people, it seems, are perfectly comfortable buying phones without ever seeing them in real life and without necessarily knowing when they'll even get them. I wonder how many of them are immediately putting the phones they don't yet have on eBay to make a little money. I've already seen a Z Flip on offer for almost $2,000.

Personally, I found the Z Flip generally delightful. I wondered, though, whether over time I'd get fed up with opening and closing it. Then again, I find it grates when Face ID ignores me like an airline gate agent.

Regardless, the Z Flip is at least something different and potentially intoxicating in a category that's desperate for any real eye-flutter.

The salesman was extremely helpful, thoughtful and straightforward. Moreover, his cautious approach was rather vindicated as reports emerged that the Z Flip's screen was easily scratched.

He admitted he was a long-time iPhone user. He explained that once he was in the ecosystem, he stayed. Moreover, his family all had iPhones, so what can you do?

I asked him if Apple would make a phone like the Z Flip.