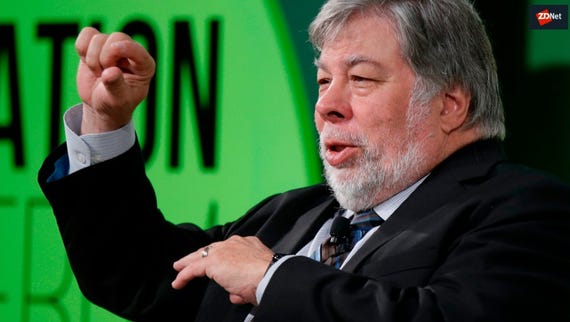 According to Null TX, the tech personality who is best known as a co-founder of Apple said in an interview at the ChainXchange blockchain convention in Las Vegas that he is working with the startup in what will be his first involvement in a blockchain-based company.

"Our approach is not like a new currency or something phony where an event will make it go up in value," Wozniak told the publication. "It's a share of stock, in a company. This company is doing investment by investors with huge track records in good investments in things like apartment buildings in Dubai."

Wozniak, who left Apple in 1985, added that there are potential plans to start up Equi in Malta, and "some countries are very positive about [blockchain in] the same way they were about electric vehicles."

Several months ago, at the NEX technology conference in New York, Wozniak said that the blockchain reminded him of the Internet dot-com bubble which prompted furious growth in online services between 1995 -- 2000, before an inevitable crash.

"It was a bubble, and I feel that way about blockchain," he said at the time.

In the past, Wozniak has called Bitcoin mathematical "digital gold," but he has now also said that Ethereum has potential as a means to create a vast app ecosystem.

See also: McAfee: Calling Bitfi unhackable may have been 'unwise' but it was great marketing

Despite feeling like blockchain -- rather than cryptocurrency -- is a bubble, an opinion which is often reversed, it seems that he is willing to give distributed ledger technology a try after all.

During the Null TX interview, Wozniak said he didn't understand blockchain originally, but after researching the concept more, the light bulb went off.

"It's kind of like the internet when it was brand new," Wozniak said. "I was amazed at the technology behind it. People start up companies that do other things in life. I've encountered people working in real estate avenues, types of Uber systems, everything we've got in our life, especially involving transactions - retail sales, car sales, manufacturing of goods .. working on Bitcoin applications... and they all have value."

At the time of writing, Equi's website is not functional. However, according to a cached page saved on August 20, the startup aims to make investments more accessible, by "giving you access to opportunities that were previously only available to high net worth individuals, with broad investment networks" through a blockchain platform.

"The Equi platform is a secure, transparent and easy to use web platform removing barriers, and opening the world to investment," the startup, launched by Ultimo entrepreneur Michelle Mone and her partner Doug Barrowman, claims.

Users of the platform are able to invest tokens based on the same system as Ethereum into capital ventures.

However, the startup has not had a smooth ride so far, and so Wozniak's reported involvement appears to be an interesting choice.

Equi launched an Initial Coin Offering (ICO) earlier this year which was canceled due to a lack of investor interest. At the time, Mone proclaimed that she was one of the "biggest experts in cryptocurrency & blockchain."

The project aimed to raise $75 million and demanded a minimum investment of $100,000 per participant but failed to raise as much as 10 percent of its goal.

However, the entrepreneur's ICO was not only canceled but a follow-up bounty hunt designed to salvage the project then also went awry.

The bounty campaign promised public promoters of Equi tokens in exchange for their work. However, the community management company hired by Equi severed ties soon after launch and participants were reportedly only paid a few dollars each, rather than a percentage of all tokens as originally promised, which was far more lucrative.

The ICO participants were refunded following the event's failure.

ZDNet has reached out to Steve Wozniak and will update if we hear back.

Join Discussion for: Apple co-founder Steve Wozniak jumps on the...