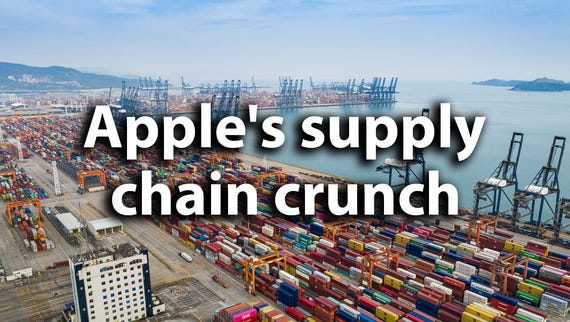 Apple this afternoon reported fiscal Q4 revenue that missed Wall Street's expectations, as iPhone revenue fell short, and profit per share that was merely in line, as the global supply-chain disruption weighed on the company's results.

During the company's conference call, CEO Tim Cook said the company's sales would have been higher by $6 billion if not for chip shortages and supply-chain constraints.

CFO Luca Maestri told analysts during the call that the revenue hit will be worse this quarter than last.

The company did not offer a forecast for this quarter, though it said revenue growth will be slower than in the September quarter.

The report sent Apple shares down 4% in late trading.

This year we launched our most powerful products ever, from M1-powered Macs to an iPhone 13 lineup that is setting a new standard for performance and empowering our customers to create and connect in new ways. We are infusing our values into everything we make — moving closer to our 2030 goal of being carbon neutral up and down our supply chain and across the lifecycle of our products, and ever advancing our mission to build a more equitable future.

Our record September quarter results capped off a remarkable fiscal year of strong double-digit growth, during which we set new revenue records in all of our geographic segments and product categories in spite of continued uncertainty in the macro environment. The combination of our record sales performance, unmatched customer loyalty, and strength of our ecosystem drove our active installed base of devices to a new all-time high. During the September quarter, we returned over $24 billion to our shareholders, as we continue to make progress toward our goal of reaching a net cash neutral position over time.

Revenue in the three months ended in September rose to $83.4 billion, yielding a net profit of $1.24 a share.

Gross profit margin in the quarter was 42.2% of sales.

Apple ended the quarter with $190.5 billion in cash and equivalents, and marketable securities, down from $194 billion in the prior quarter, against $125 billion of term debt and commercial paper liabilties, for a net cash position of $66 billion. Apple intends to reach a "net zero" cash position over time, Maestri has said.

Apple said it made $38.69 billion in revenue from iPhone in the quarter, up 47%, year over year. That was below the average Wall Street estimate for $41.7 billion.

The year-over-year growth of roughly 29% was in line with the general expectation Apple had offered when last it reported, in July. Apple had not offered a specific forecast at that time.

Instead, CFO Maestri had projected that revenue would have "very strong double-digit year-over-year revenue growth during the September quarter," but that it would be less than the 36% growth in the June quarter, citing foreign exchange impact, a slowdown in services revenue, and the impact of global supply chain constraints.

Apple again this afternoon did not offer a forecast.

For the current quarter, the Street consensus stands at $119.42 billion and a $1.86 profit per share.

Apple will discuss the results on a conference call at 5 pm, Eastern time, and you can catch a Webcast of it on the company's investor relations site.

Update: During the call, Cook noted the supply chain impact on sales, saying, "We estimate these constraints had around a $6 billion revenue dollar impact driven primarily by industry wide silicon shortages and COVID-related manufacturing disruptions."

During prepared remarks on the call, CFO Maestri said the company's revenue was a new record for the Apple for a September quarter, which he attributed to "better-than-expected demand for our products despite supply-chain constraints that we estimated at $6 billion."

Maestri said the iPhone revenue total was also a September-quarter record "despite supply-chain contraints." Sales were a record in both developed and developing markets, said Maestri.

Apple now has 745 million paid subscriptions across all its platforms and services, said Maestri, more than 160 million higher than the prior-year total, and five times what the company had less than five years earlier.

Regarding the company's outlook, Maestri said that "given the continued uncerainty around the world," the company would again not forecast the current quarter, instead offering "directional assumptions," Maestri said. "We estimate the impact from supply constraints will be larger during the December quarter."

Revenue growth will "decelerate from the September quarter," said Maestri, "but to remain strong." All product categories will grow this quarter, except for iPad, said Maestri.

Asked about the supply-chain impact this quarter, Cook said that COVID-induced disruptions have eased, but that chip shortages will linger.

"It is affecting pretty much most of our products currently," said Cook.

Cook clarified later in the call that Apple is "getting lots more supply" during the current quarter, but that the larger shortfall it expects is a consequence of what it expects to be high demand for its products.

Digging into the details of chip shortages, Cook said the shortage is not in "leading-edge" nodes, where Apple buys most of its parts, but rather in "legacy nodes," meaning, older forms of chips. Cook said he didn't want to try to forecast how that shortage will play out. Apple's supply chain executives "are doing everything they can do" to remedy the shortage, he said.

Cook said Apple's inventory of iPhones is below the company's target.

Cook was asked by an analyst to describe iPhone 13 demand. Cook replied that it is "so early to talk about iPhone 13," but added "I would clearly characterize the demand that we're seeing currently as robust," adding that there is "significant demand" for iPhone 13.