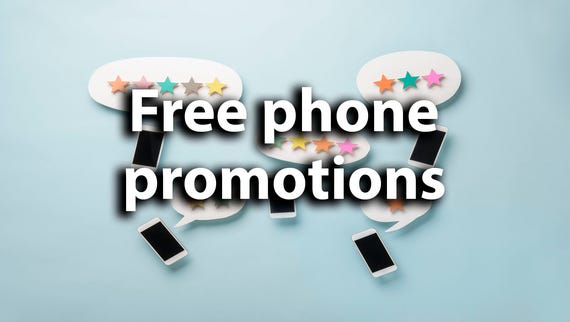 Free phone promotions: Too good to be true?
Watch Now

At any given time, you can walk into a wireless carrier's retail store or visit its website and see countless free phone promotions. As we just saw with the launch of the iPhone 13 lineup and Apple including carrier deals on its own website, even the iPhone maker is getting more aggressive with supporting carrier smartphone promotions.

One question always comes up with promotions like this: Are free smartphones really free? Let's take a closer look at what's often required by carriers in order to qualify for a promotion, and in most cases, what that ends up costing you.

You need the right phone to trade-in

Trading in your current phone is a key part of nearly every free smartphone deal. But not all phones are treated equally when it comes to overall value. It makes sense that a Samsung Galaxy S10  doesn't hold the same value as a Galaxy S21 Ultra .

But that's one of the "gotchas" with the current landscape of smartphone promotions. The free-phone-deals are advertised as a best case scenario. Meaning, with a trade-in that brings in the maximum value.

If you pay close attention, almost every single carrier and retailer includes two important words before every trade-in offer: "up to." For example, right now Verizon Wireless states you'll get up to $700 off the price of a Pixel 6 with a trade-in.

Sounds great, doesn't it? A free Google Pixel 6 is a heck of a deal.

But, it's not that simple. That $700 credit depends on which phone you're trading in. If you're trading in an iPhone 11 or Pixel 4, you'll get that full amount. However, an iPhone 8 or Pixel 3 will only net you $350 towards the cost of your new phone.

Interestingly enough, the trade-in value of an iPhone 8 or Pixel 3 when you purchase a Pixel 6 Pro goes up to $400. See? Carriers are tricky when it comes to trade-ins.

You need to sign up for a qualifying unlimited

It isn't enough to have a high-value phone to trade in, but carriers also require you to sign up or already be on a specific monthly plan in order to qualify for a promotion. Across the board, those qualifying plans are some sort of unlimited plan -- which also happen to be the most expensive plans offered by carriers.

That means that even if you use minimal mobile data every month and are on a more affordable plan with a data cap -- you'll need to pay more every month to get your "free" phone.

AT&T's current promotions allow you to sign up for any unlimited plan, with prices starting at $75 per month for a single line. T-Mobile currently has a promotion for a free iPhone 13 Pro  with an eligible trade-in, and when you sign up for its $85 per month Magenta Max plan.

Verizon obscures which plans are eligible for promotions, with the fine print only detailing "Select Unlimited plan required" as a requirement. I reached out to Verizon and asked for that language to be translated into actual plans for customers. And for those who are shopping for an iPhone 13, you'll need to sign up for either the Play, Do or Get Unlimited plan. The Play plan starts at $80 per month .

If you meet the trade-in and unlimited plan requirements, the final aspect of most free phone promotions is that the cost of the device is credited to your account over a set amount of time. For example,  AT&T currently lists the 128GB iPhone 13  as free with a trade-in and unlimited plan. The cost of the iPhone 13 is broken down into monthly payments of $22.23 over the course of 36 months (36 x $22.23 = $800.28).

When you accept the free phone, you'll begin to see credits on your bill in a month or two, negating the cost of the iPhone each month.

But here's the catch -- if you change your plan or cancel your service, the credits stop and you're charged the remaining balance for the phone.

Effectively, 36 months worth of credits is a 3-year contract, just like carriers used years ago when smartphones were subsidized.

Take a few minutes and read through the fine print for a phone's promotion if you're shopping online. Nearly all of them are some form of AT&T's offer that I just outlined, with the biggest change being the length of time it takes to issue credits for the phone.

If you're in a retail store, ask questions! Ask the salesperson for the length of the credits, the overall cost of the phone if you bought it outright, and what changes on your part would trigger the credits from stopping.

What about Buy-One-Get-One promotions?

Carriers often have some sort of promotion that includes two phones. The first you pay for on a monthly payment plan, and the second you get for free when you add a new line of service to your account.

The extra line comes with its own set of additional costs, of course. You'll need to pay more each month for service on that line, which is expected.

The kicker here is that instead of being required to stay on a qualifying price plan for the term of the credits for a single line, you'll need to stay on that plan for two lines -- increasing your monthly spend.

Are there hidden fees?

If you have the right trade-in, sign up for the right plan and are okay with the length of credits, there's one more hurdle to get over -- you'll still have to pay something at checkout.

Most often, you'll need to pay some sort of upgrade or activation fee, ranging anywhere from $30 to $35. Taxes for the total cost of the phone will also need to be collected at checkout.

In other words: Don't expect to walk into a carrier's retail store and walk out with a brand new phone without spending a penny. You're going to pay something.

So, are free phones really free?

It's complicated, but at the end of the day, the answer is most likely "No." You either have to give up something you currently own, like your existing smartphone, or you have to sign up for a monthly plan that may be overkill for your personal use.

And depending on the installment plan a promotion requires, any changes you make could jeopardize your monthly credits, which means you will owe your carrier the remaining balance to cover the cost of the phone.