Portable and affordable, the Surface Go has launched at the right time to invade a coffee shop near you. But with Apple likely prepping new iPads, Microsoft still has work to do on the Surface's keyboard-free tablet experience.
Written by Ross Rubin, Contributor on Aug. 31, 2018 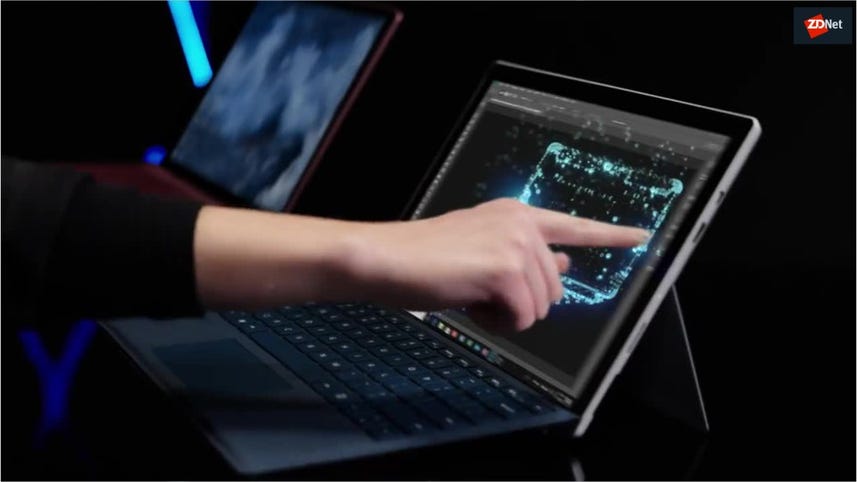 When a company executes a product well after a checkered history, it's tempting to say that that product is what the company should have created to begin with. But that's not the case for the Surface Go, Microsoft's fourth go at creating a smaller and less expensive version complement to its more successful Surface Pro line of 2-in-1s. Of course, Microsoft's first such attempt, which ran the doomed Windows RT operating system, was a much worse product when it started. But it is only through having viewed the many changes in the tablet and 2-in-1 markets over the past few years that the Surface Go's true value can be best understood.

Unlike earlier Surfaces unworthy of Pro designation, the Surface Go benefits from the Pro line having proven out the value of the 2-in-1 form factor it pioneered. Indeed, the addition of the "Go" surname to follow what had historically been the default Surface line indicates Microsoft's attempt to reposition the more portable Surface. Versus the Surface 3, the first commercially viable product in the line, the Go is smaller yet more powerful, making it an excellent companion for taking notes and doing light productivity work.

It's not immune to the kind of slowdowns that drag down low-end devices when background tasks kick into high-gear, particularly at startup. However, when paired with its signature accessory, the Type Cover, its one-pound body becomes about as perfect a casual computing device as exists in the market -- one that doesn't require the kind of strange multitouch machinations needed to move files around as on the iPad Pro.

Yet, in terms of serving as a showcase for other Microsoft technologies, Windows 10 is a double-edged sword on the device. As with other 2-in-1s that runs the Microsoft operating system, its shift back to a more desktop-like experience combined with new cloud-based additions to the platform such as timeline, provide a familiar and flexible work environment.

On the other hand, while few users would want to return to the disparate Windows 8-style touch mode of Windows 8, Microsoft's reconciliation of its desktop and touch environments and relaxing of its touch push have done nothing to stir development of optimized Windows 8 tablet apps. And Microsoft still has work to do in terms of populating the tiles of tablet mode without having to clutter up the desktop Start menu.

Still, even as the iPad Pro's software and accessory system have grown to address advantages of the Surface, the Surface Go's smaller size benefits from its stronger PC versus smartphone orientation as consumers continue to turn increasingly to larger phones to get app-focused tasks done on the go. Consumers are expecting more flexibility and functionality when stepping up to a 10-inch device.

That said, particularly if you're willing to go in on Microsoft's default apps, the Surface Go is fine for such tablet staples as email, web surfing (even with the frequent nagging of Chrome users to switch to Edge), PDF reading, and watching movies. Indeed, it's a better alternative to small, lightweight convertibles -- even as Lenovo has recently announced an October update to the Yoga, the most tablet-competitive convertible in the market. And while those devices retain an edge when it comes to lap stability, the smaller size of the Surface Go even improves its ability to balance in such scenarios versus larger Surface Pros.

The Surface Go isn't really a modern-day 2-in-1 netbook. Its introduction follows some experiments in that space, such as the far less expensive and under-powered ASUS Transformer mini. But it's likely to show up atop a lot coffee shop tables and campus library desks, particularly as it becomes an option for this year's back-to-school shopping season.

The iPad Pro is likely to see a revision at Apple's event slated for Sept. 12. And the entry of more compelling Windows-on-Snapdragon devices using the Snapdragon 850 could spur stronger competition for the Go. Microsoft itself may opt to produce a clone of the Intel-based version using the new architecture, which would bring longer battery life and integrated cellular connectivity. But regardless of whether that happens, the Go represents Microsoft's strongest shot at building an ultraportable tablet business for Siurface so far

https://www.zdnet.com/article/after-three-microsoft-misses-its-go-time-for-a-smaller-surface/The Surface Go ups Microsoft's tablet game from the similar Surface 3, but it keeps the legacy mission focused on fighting the iPad even as the tablet market has retreated from retail.

https://www.zdnet.com/article/surface-go-first-look-small-light-and-the-best-cheap-pc-ever/Twice before, Microsoft has tried to deliver lightweight, low-cost Surface laptops. Both times, the market said no. With the new Surface Go, they finally got it right.