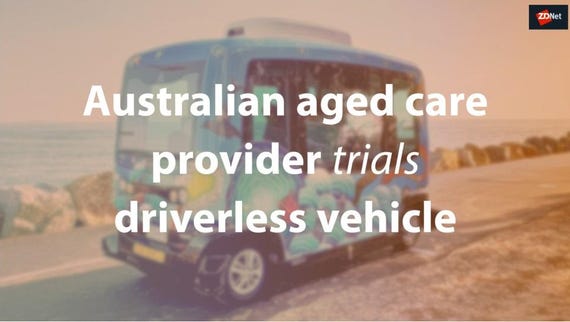 Aged care provider, the IRT group, is trialling a driverless vehicle at one of its aged care centres in Canberra.

The driverless vehicle used in the trial, EasyMile's EZ10 autonomous shuttle, follows an eight stop loop of IRT Kangara Waters and can carry up to eight passengers. The EZ10 also has a deployable access ramp to accommodate passengers with mobility aids, IRT CEO Patrick Reid said.

The purpose of the trial, IRT said, is to determine how driverless vehicles can be used to improve the independence and quality of life of older people.

"As we test the EZ10 on the private roads within IRT Kangara Waters we hope to better understand how it could help aged care and retirement living residents travel more independently and in turn reduce the social isolation that can occur when it's hard to get out and about without the assistance of a friend or family member," Reid said.

"Many residents are still mentally very capable but no longer drive due to common life changing events, such as the loss of a driver's licence due to age, a fall causing mobility difficulties, loss of hearing or eyesight."

According to IRT, quantitative and qualitative data will be collected throughout the trial to measure perception shifts and behavioural changes of participating residents. The data collected will be shared with government and industry bodies to assist in the development of public policy surrounding the use of autonomous vehicle technologies in an aged care and retirement living settings.

The project is partially funded by Telstra.

The Easymile EZ10 has been used to operate selected bus routes around Oslo, Norway since June last year.

Elsewhere in Australia, the South Australian government in January launched a six month trial of a new autonomous bus and smart transit hub in Adelaide while the Victorian government gave approval for Bosch to test automated driving systems on the state's rural roads during that same month.

The Navya shuttle is considered a level four, highly autonomous vehicle designed to carry up to 12 passengers. It can travel up to 40kph in autonomous mode, with features including front and rear cameras, LIDAR, GPS technology, and autonomous emergency brakes.

Similar efforts are also underway in the country's west, with Perth previously chosen as one of three cities to host a trial of Navya's electric, driverless fleet, run by the Royal Automobile Club (RAC) of Western Australia and the WA government.

The automotive parts giant was handed a AU$2.3 million grant to trial the technology.