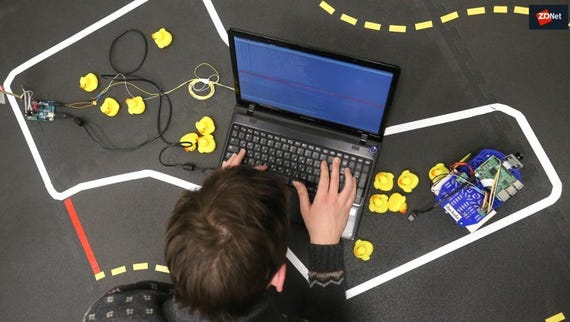 Why DIY robotics has become a thing
Watch Now

With the extraordinarily limited powers vested in me, I'm declaring this (ahem ... unofficially) DIY robotics week here at ZDNet. Earlier this week, robotics company Vincross dropped a new robotics dev kit for makers. Then we unearthed a story about a small business owner who hacked together some customized automation for his janitorial services company.

Now Sphero, a Boulder-based robotics company best known for its rolling robot toys that enhance STEAM skills, including a pretty nifty BB-8 droid, is out with a new DIY robotics platform of its own. Called RVR, the robot looks a lot like an RC car, only it's infinitely hackable and designed to entice coders of all levels to come up with imaginative use cases, a departure in a crowded field of STEAM products aimed solely at beginners.

The DIY undercurrent in robotics is nothing new. Falling sensor prices, rapid prototyping, the abundance of cheap microprocessors, and a supportive community of makers have all contributed to enthusiasts creating everything from clever bots that protect your precious Girl Scout cookies, monitor rainfall, and guard the castle to more useful machines built to serve. Kickstarter is lousy with robotics and drone projects (some of them lousy, others very cool) from ambitious amateurs.

In parallel to and aiding the DIY movement, there's a new emphasis in robotics on lowering barriers to entry for robotics programming. New sensor-embedded clothes, for example, as well as virtual reality modules allow anyone to become a robotics programmer. As so-called programming-by-demonstration progresses, the customization of use cases for robots is only to grow.

Some of the biggest winners in the move toward hackable, customizable platforms in robotics have been grad labs. For years, grad students have grappled with source code on kludgy, standardized robotic arms. The open-source Robotic Operating System has helped streamline and speed up original development, giving makers a huge menu of readymade tools to program unique robots. Now we're seeing hardware platforms that are built for customization out of the box.

RVR, the latest example of a ready-to-hack platform, has several on-board sensors, including a color sensor, light sensor, IR, magnetometer, accelerometer, and gyroscope. Without an articulated arm its real-world usefulness is limited to non-grasping tasks, although a universal expansion port enables connection to third-party hardware like Raspberry Pi, Micro:Bit, or Arduino, so it's possible some budding engineers will figure out to make this bad boy pick and place.

"This is truly a professional-level robot, without the hefty price tag," says Adam Wilson, Sphero co-founder and chief creative officer. "By connecting your hardware of choice to the expansion port, the customization possibilities are endless and entirely up to you. For example, you can hook up a camera to RVR and program facial recognition to do a dance every time your best friend walks by."

True to its maker roots, Sphero is launching the RVR on Kickstarter for an initial price of $199. Sphero is partnering with SparkFun Electronics to build kits incorporating camera vision and GPS, which leaves the door open for full autonomy. SparkFun is backing the Kickstarter campaign with a "Get a Bot, Give a Bot" initiative aimed at schools.

"RVR is the kind of robot I wish I had growing up," says Wilson, echoing a sentiment of many makers who are only now enjoying an abundance of robotics dev tools. "For makers, developers, and anyone who loves to build things, RVR's advanced capabilities bring to life everything that makes coding exciting. That creative experience is at the core of why we first started Sphero."