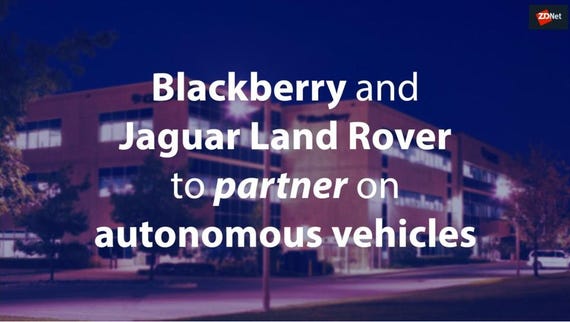 Blackberry and Jaguar Land Rover have announced that they will work together to develop new autonomous vehicles using artificial intelligence (AI) and machine learning technologies.

"BlackBerry is a trusted partner of the automotive industry because of our heritage and innovations in secure communications," Blackberry CEO John Chen said.

"We are pleased to be Jaguar Land Rover's chosen partner for safety-certified technology, as we advance Artificial Intelligence and Machine Learning technologies to transform automotive safety."

See also: How autonomous vehicles could co-exist with traditional cars in the near future (TechRepublic)

This announcement marks the first integration of Cylance's AI technology into Blackberry's solution since it bought the security company at the end of last year, a deal that was worth $1.4 billion. It was the largest acquisition for Blackberry to date.

At the time, Blackberry said it would expand Cylance's capabilities across BlackBerry's portfolio, including QNX, its safety-certified embedded OS that is deployed in more than 120 million vehicles and medical devices. Blackberry said that, over time, it plans to integrate Cylance technology with its BlackBerry Spark communications platform.

Not long after the acquisition, Blackberry launched a security credential management service designed for smart cities and transportation services so autonomous vehicles could securely communicate with infrastructure, such as traffic lights and roads.

During its first quarter financial results in June, Blackberry reported a net loss of $35 million. It was the first quarterly report since the company reorganised into three business units: IoT, Blackberry Cylance, and Licensing.

At the time, Chen noted the company's integration with Cylance was ahead of schedule, with back-office, personnel, sales and R&D teams almost completely merged.

"We expect [the Cylance integration] to be done within this fiscal year," Chen said.

"It will be done meaning to be released as a product, so that's reasonably record time. The next team that has launched is to look into putting Cylance AI technology on to the automotive platform, on the QNX. That's going on very well, too. So I think, on the technological side, it's very, very positive."

This is the first quarterly report since BlackBerry reorganized into three business units: IoT, BlackBerry Cylance, and Licensing.

CEO John Chen noted on the company's earnings conference call that BlackBerry will reorganize into three business units for fiscal 2020.

Palma is set to play a key role in integrating Cylance into BlackBerry's products.

Why BlackBerry should change its name

BlackBerry is all about enterprise software, services, security, and the Internet of Things these days. Why keep a name that mostly brings up an image of a keyboard-based smartphone?