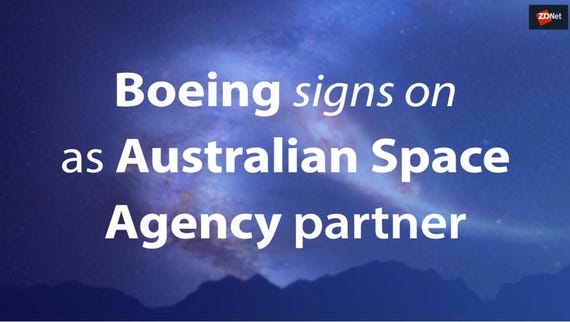 The newly stood up Australian Space Agency has signed a Statement of Strategic Intent with global giant Boeing in a bid to help the agency grow the nation's space industry.

By 2030, Australia would like to grow the space market segment from AU$3.9 billion to AU$12 billion and double space industry employment from about 10,000 today to 20,000, and expects partnerships like the one with Boeing to help it get there.

Under the arrangement, the space agency said Boeing will offer support for investments in R&D, innovation, STEM education, and government programs.

"This partnership opens the doors for Australian innovators to participate in the global supply chain of the space sector."

The Australian Space Agency is responsible for the whole-of-government coordination of civil space matters and was stood up in July 2018, following a AU$41 million, four-year investment by the Australian government.

Other partnerships the agency has forged so far have been with France, Canada, the United Kingdom, the UAE, and discussions have commenced with the United States and the European Space Agency. On the industry side, it signed a similar Statement of Strategic Intent and Cooperation with Lockheed Martin Australia.

Similar to the arrangement with Boeing, the space agency is expected to receive assistance from the local arm of the defence and aerospace giant in building Australia's space capabilities, particularly where education is concerned.

The agreements with Boeing and Lockheed Martin form the first phase of the space agency's plan to transform and grow Australia's space industry over the next 10 years, which was detailed in a roadmap released last week.

According to the Australian Space Agency, the partnership with Boeing expands on the company's existing space-related projects down under, including four new space R&D projects with CSIRO; the use of Boeing-built Wideband Global SATCOM (WGS) and IS-22 satellites by the Australian Defence Force (ADF); using Boeing as a contractor for the ADF's Project LAND 2072 Phase 2B Currawong Battlespace Communications System, which will include Australian-developed satellite communications terminals for accessing the WGS satellite network; the development of a virtual reality training system for the CST-100 Starliner, which will take passengers or a mix of crew and cargo on missions to low-Earth orbit; and the Boeing HorizonX Ventures' investment in Adelaide-based Myriota, an Internet of Things (IoT) startup focused on low-cost access to satellite communications.

It also uses Queensland as a test bed for its autonomous systems development program, and boasts an R&D innovation lab in South Australia.

Of the total AU$36 billion the federal government has spent on IT-related procurement from 2012-13 through 2016-17, Boeing was awarded 165 contracts to the value of AU$1.6 billion. The company received a total of AU$4.2 billion when counting services outside of IT.

The overarching plan of the strategy is to triple the size of Australia's space sector and grow an additional 20,000 jobs by 2030.

Join Discussion for: Boeing signs on as Australian Space Agency...