Banned from using Huawei, BT has chosen the Swedish carrier equipment provider for the core of its 5G network.
Written by Chris Duckett on April 15, 2020 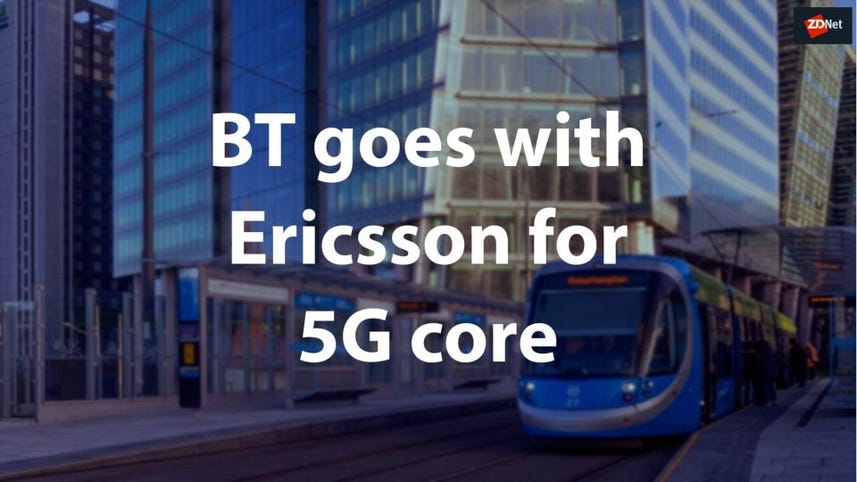 British telco BT has decided upon using Ericsson equipment for the core of its 5G network, the Swedish carrier equipment provider announced on Wednesday.

Ericsson said it would provide the core for 4G, non-standalone 5G, and eventually 5G standalone services, which will become a converged IP network.

"The containerisation of core network functions will enable BT to benefit from greater industry innovation in many areas, including automation, orchestration, network resilience, security, and faster upgrade techniques," Ericsson said.

"This means increasing overall network availability for customers and services while being cost-effective."

BT said it went with Ericsson after looking at a number of other vendors and based its decision on lab performance and future roadmap.

One vendor unable to be considered for the core network contract was Huawei, which was banned from such deals in January and had previously provided core equipment.

The UK government also put in place a 35% cap on the use of equipment from "high-risk vendors" on non-sensitive parts of the network.

"The restrictions and controls we detail in the high-risk vendors framework give us a way of minimising the risk of using a high-risk vendor like Huawei," said technical director of the National Cyber Security Centre Ian Levy said at the time.

Earlier this week, Huawei said placing further restrictions on it in the UK would be a disservice.

"We have built trust in our UK business over 20 years by helping our customers -- the mobile network operators -- provide consumers with affordable, reliable calls and data," Huawei vice president Victor Zhang said.

"Despite this, there has been groundless criticism from some about Huawei's involvement in the UK's 5G rollout. And there are those who choose to continue to attack us without presenting any evidence. Disrupting our involvement in the 5G rollout would do Britain a disservice."

BT said in December 2018 that it would begin stripping its mobile network of Huawei equipment.

"In 2016, following the acquisition of EE, we began a process to remove Huawei equipment from the core of our 3G and 4G networks, as part of network architecture principles in place since 2006," a BT spokesperson said at the time.

"As a result, Huawei has not been included in vendor selection for our 5G core."

Huawei: 5G U-turn would be a bad idea

Chinese tech giant warns of "groundless criticism" of its involvement with new networks.

Multi-user MIMO sees Samsung transfer 4.3Gbps of data to a pair of mobiles.

The report, conducted by Waveform, also suggests that the newly merged T-Mobile and Sprint is unlikely to lure customers away from wireless market leader Verizon.

Suspected arson attacks have been connected to theories spreading online of 5G as a cause of coronavirus.