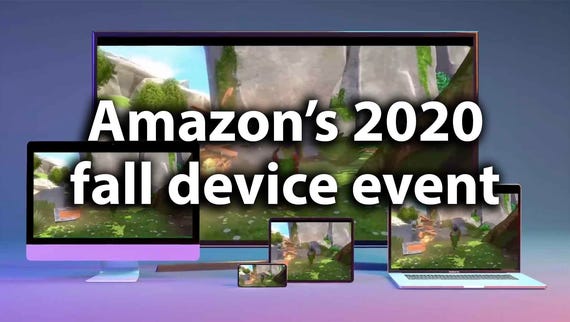 The past few years of Alexa-related product launches have seen rise to some of the most unusual devices launched by a major tech company. (OK, Google, we'll give you Google Clips.) There's been the Alexa ring, the Alexa glasses, the Alexa wall clock, and the Alexa microwave. This year, though, as Amazon released the biggest upgrade to Alexa since the agent first showed up in its cylindrical house called Echo, its developer brought forth a smaller range of Alexa devices. That may be in part because the company has been doing such a good job of getting third parties to spread the cyan-accompanied conversationalist far and wide. Moreover, the company's commitment to sustainability favors not only fewer, more durable devices, but those using sustainable materials that may not be so easily leveraged in niche forays.

Everything Amazon announced: Prices, release dates, and how to buy There's a new spherical Echo, Echo Show 10 with a Portal-like display, Ring drone and car alarm, Luna controller, and more.

In contrast to the Echo proliferation slowdown, Amazon's Ring product line continued to expand well beyond its signature video doorbell with a new premium service offering and a move into vehicles with a car alarm and camera connection service that showed more thoughtfulness than the dashboard screen invasions of Apple CarPlay and Android Auto. The division also showed off a small mailbox sensor that can alert you of new postal mail and address mail theft. It raised the most eyebrows by far, though, with the Always Home Cam, a self-docking drone designed to autonomously fly through one unoccupied floor of a home, capturing footage of what it sees.

Drones don't have the best reputation when it comes to privacy, so it's natural that the Always Home Cam has inspired skepticism. Stepping back, though, let's consider the practicality of Ring's ambitious sentry. For those who want to surveil their homes, the drone tackles the longstanding challenge of not only mounting security cameras but keeping them charged.

Plus, unlike stationary cameras, which can be used to capture parts of the home at any time, the Always Home Cam makes limited runs through the home and cannot capture video while docked. Amazon says that it can be activated only manually, not on a scheduled basis. And if the rooms you'd rather have the drone avoid, such as bedrooms, are on another floor of the home, one can take comfort in that the Always Home Cam is currently limited to patrolling only one floor at a time.

Still, based on some casual web research looking back at the early days of the Roomba, which debuted in 2002, the novelty of the Always Home Cam's flight seems to give more pause than that pioneering robotic vacuum cleaner did. To combat this, Amazon could do a better job in providing assurances around privacy and hacking. For example, while it is likely the case that a homeowner can designate only the areas that the drone is allowed to fly, the Always Home Cam can theoretically capture more of a home than fixed cameras that can pan, tilt and zoom. Given this, small offices may have been a better initial market for what could have been called the Always There Cam.

Likewise, were a bad actor to take over the drone, its physical presence would likely be, at worst, a nuisance (albeit one that could frighten someone who was unaware). But Amazon could allay fears related to this by clarifying the drone's maximum speed and whether it is programmed to avoid human contact should it be detected. A secret "kill word" that could be spoken to the drone and cause it to immediately softly land and turn off would also offer some assurance.

Join Discussion for: Can Amazon convince you to welcome a security...