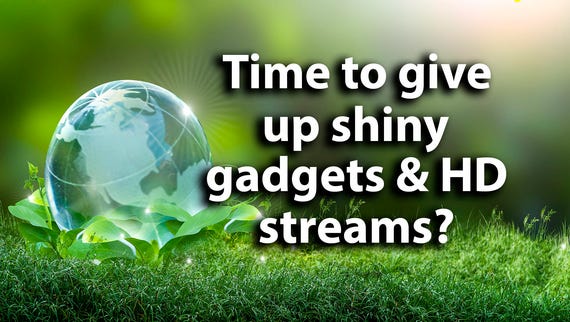 Green tech: Why it might be time to give up shiny gadgets and HD streams
Watch Now

We need to cut global emissions, and fast – and in doing so, tech businesses are both part of the the problem – and the solution. A new report from the UK's Royal Society finds that as technologies keep growing at pace, the onus is on the digital sector not only to reduce its own carbon footprint, but also to come up with innovative ways to reverse climate change globally.

While there is no exact figure that sums up the impact of digital technologies on the environment, the report estimates that the sector currently represents between 1.4% and 5.9% of global greenhouse gas emissions. At the same time, the industry is projected to make huge strides in the coming years: for example, the total number of internet users is expected to reach 5.3 billion by 2023, up from less than four billion in 2018.

All this extra connectivity comes at an environmental cost. The complex infrastructure of cables, fibers, computers, data centers, routers, servers and radio masts that are required to run the digital world need power to be built, and even more so to be used and maintained. Data centers alone accounted for 0.8% of global electricity demand last year.

On a consumer level, the report identified small steps that can be taken to mitigate the impact of new technologies. For example, keeping phones, laptops, tablets or smart TVs for four years can halve the amount of carbon emitted compared to renewing a device every two years. Even better is to purchase second-hand devices; and users should always make sure that they recycle their old phones, which, if kept in a drawer at home, "amount to a form of landfill," said the researchers.

Similarly, streaming should be done responsibly: the report warned that one hour of streaming on a smartphone generates eight times more emissions in ultra-high definition than it does in standard definition, despite little difference between the two options on a small screen. Turning off the video when listening to YouTube content could equally save between 1% and 5% of the service's total emissions.

But the biggest window of opportunity, according to the Royal Society, is for tech businesses to go green – although the chance is not one that they have much of a choice but to grab. To limit global average temperature increases to 1.5°C, as pledged by governments around the world, will require the full cooperation of every player in the industry.

"While digital technology is just one part of the solution, it is absolutely central to the net zero future we must build," said Andrew Hopper, who co-authored the report. "The tech sector is in a position to lead by example. It can manage its own carbon footprint, for instance by scheduling computing jobs at times of peak power production, to make the best use of renewable sources."

In many ways, the digital technology sector is already on track to deliver climate-friendly promises that were already made, led in a large part by commitments from the biggest companies in the field. Google and Apple are purchasing and generating enough renewable electricity to match 100% of their data center energy consumption, for example, while Microsoft ambitiously pledged to remove all the carbon emissions it has produced since it was founded in 1975.

This is partly due to businesses switching to cloud-based software and transferring their data to hyperscale data centers, which are more effectively managed than smaller, local ones. Reports have shown that in the US, moving all office software applications to the cloud could reduce the energy used by IT by almost 90%.

Thanks to new technologies like artificial intelligence, data centers are becoming ever-more sustainable. In 2016, for instance, Google and Deepmind developed a machine-learning system capable of intelligently managing the temperature of the Search giant's data centers, which helped save up to 40% of the energy needed to cool the buildings. Google also recently announced a new intelligent platform that can time computing jobs in data centers to match peaks in renewable energy generation, as part of the company's commitment to "24x7 carbon-free energy."

SEE: Microsoft is opening this 'advanced and sustainable' datacenter region next year

This is not enough, according to the Royal Society. A critical part of transition to green tech will consist of holding businesses accountable to their climate targets, through the organized collection of data about organizations' consumption of power.

"The tech sector needs to improve data collection and reporting practice about the energy consumption of digital systems, as well as sources and energy mix, to monitor and accelerate progress against climate targets," reads the report.

It is up to governments to implement the appropriate requirements for businesses to share their climate-related data, but there is also space for new technologies to help. Only this week, Boston Consulting Group (BCG) released an open-source software package called CodeCarbon, which estimates the amount of CO2 produced by the computing resources used to execute a given code.

The tool was designed to help developers estimate the impact of their software on the environment, and take steps to reduce emissions, for example by selecting their cloud infrastructure in regions that use lower carbon energy sources.

New technologies, therefore, can improve energy efficiencies and reduce carbon emissions – for the digital sector, but not only. "Nearly a third of the 50% carbon emissions reductions the UK needs to make by 2030 could be achieved through existing digital technology – from sensors to largescale modelling," said Hopper.

"For example, digital twins – virtual representations of physical assets – have already helped increase the yield of some wind farms by up to 20%, as well as improved their life span," he added.

According to the report, the various applications of AI alone could save up to 4% of greenhouse gas emissions by 2030. Digital twinning coupled with machine learning can help optimize tasks in factories, and AI systems can enable better crop yields in agriculture, while reducing the amount of energy used on farms. Algorithms can reduce congestion in cities, and cut the transport sector's carbon footprint, which currently represents almost a quarter of the UK's total emissions.

In the longer term, technologies like supercomputing and quantum computing are expected to develop more solutions to reversing climate change, ranging from improving supply-chain efficiencies to discovering new materials for energy storage.

There is no need to start investing in such sophisticated pieces of technology, however. Smaller-scale platforms that can contribute to climate goals are already multiplying. They range from "mobility-as-a-service" tools that can improve traffic and encourage the use of public transportation, to online marketplaces specializing in the sale of second-hand items to support the circular economy; through smart meters that can be deployed in households, that the Royal Society estimates could contribute a 25% emissions savings from UK homes by 2035.

There is a huge scale of opportunity in investing in the development of businesses that align with net-zero objectives, concluded the Royal Society. The report called for government help and support to such initiatives: the future of tech has to be green.

Join Discussion for: Climate change: Why it could be time to cut...