Users have just over a year to find a better solution.
Written by Chris Duckett on Nov. 21, 2019 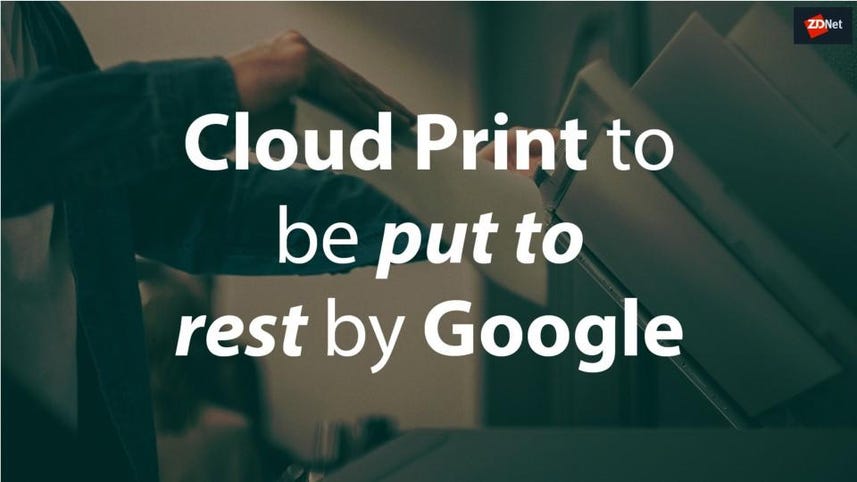 At the end of 2020, after over a decade in beta, Google will pick up its product-ending shotgun and take Cloud Print for a talk behind the back shed, from which it will never return.

"Beginning January 1, 2021, devices across all operating systems will no longer be able to print using Google Cloud Print," Google said in a support note.

"We recommend that over the next year, you identify an alternative solution and execute a migration strategy."

Last week for its own Chrome OS operating system, Google added CUPS printing, which it will use instead of Cloud Print.

"For environments besides Chrome OS, or in multi-OS scenarios, we encourage you to use the respective platform's native printing infrastructure and/or partner with a print solutions provider," Google added.

See also: Android ecosystem is not ready for adolescent Pixel 4

When it was introduced at the start of 2011, Cloud Print was touted as a way for desktop and mobile users to easily print without needing to install drivers.

In the intervening years, printer vendors added support for the soon-to-be-deceased Cloud Print.

Over the course of 2019, Google has ended a number products.

In June it sent its best email client, Inbox, to the great abandoned app pile in the sky. This was followed by ending support for its Hire product at the end of August.

Earlier in the year, Google brought forward the kill date for its Google+ product, and flagged the departure of the consumer version of its Hangouts products in January.

Laptops
The 7 best cheap tablets of 2022