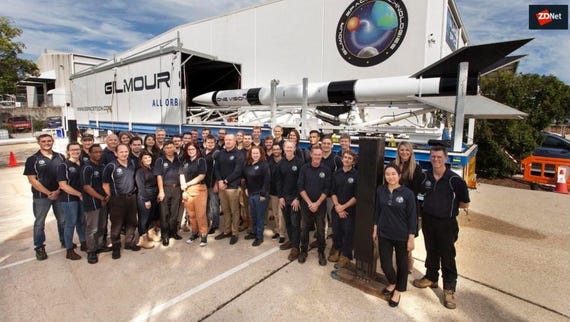 Australia's Department of Defence and Gilmour Space Technologies have signed a deal to build a three-stage rocket to launch small payloads and satellites into orbit by 2022.

Under a new strategic agreement, the partnership will see Defence Science and Technology (DST) and the Queensland-based company research and develop defence-related technologies including propulsion, materials, and avionics technologies, to help develop the rocket for launch.

"The ultimate goal in the first deal is to help us get to space," Gilmour Space Technologies CEO and founder Adam Gilmour told ZDNet.

He revealed how the pair have been in "close discussions" about the agreement for a number of years.

"Many of [Defence's personnel have] come to visit our factory, we've gone to visit their premises, we've discussed a lot about technology," Gilmour said.

"What's happened in the last six to nine months is we've narrowed our technology and design into something we're confident with now to generate a roadmap of technologies we need to master to get to space."

While Defence has yet to finalise the exact requirements that are needed for the 2022 launch, including how many satellites and payloads will be launched, the size of them, or where they will be placed into space, Gilmour said he was confident that when it does happen, the technologies will be able to achieve low earth orbit of between 200 kilometres to 5,000 kilometres.

Currently, he said, most satellites launched into low earth orbit are between 400 kilometres and 1,000 kilometres.

Gilmour added when in orbit, the satellites would serve two main purposes: Guaranteed communication no matter the location and the ability to track the movement of Defence forces.

"The sensors [on the satellite] can look down at the earth and see things like troop movement or shifting vessels, or tanks, so information about where adversary forces are is very important for military and that's what satellites can do," he said.

Minister for Defence Linda Reynolds said the agreement is part of the government's plans to innovate and support Australia's defence industry.

"Technology advances have allowed rocket systems and launch service providers to offer access to space at a greatly reduced cost and infrastructure footprint," she said.

In addition to this first launch, Gilmour said there are plans to also work with Defence to launch two more rockets 12 months following the first one, before building "a cadence of 10 to 15 launches a year".

Gilmour is a venture capital-backed startup, which secured AU$19 million in funding in a round that was led by CSIRO-backed Main Sequence Ventures and Blackbird Ventures.

The antenna's 40-year old transmitters will be replaced to reduce the risk of unplanned outages.