The company reported first quarter earnings of $329 billion, or 38 cents a share, on revenue of $21.9 billion, up 3 percent from a year ago. Non-GAAP earnings for the quarter were $1.45 a share.

Wall Street was looking for Dell fiscal first quarter non-GAAP earnings of $1.21 a share on revenue of $22.24 billion. Earnings estimates had a wide range given that Dell is recently public.

Jeff Clarke, vice chairman of Dell, argued that enterprises are in "the middle of a technology led investment cycle." Clarke also touted the company's recent launch of the Dell Technologies Cloud platform.

Like HPE, Dell saw weakness in servers and storage. Dell said its infrastructure solutions group revenue was $8.2 billion, down 5% from a year ago. Server and networking revenue was down 9%. The company said its hyperconverged infrastructure grew in the triple digit range in the quarter.

I attribute the 9% decline in server and networking revenue to many factors. I believe the market did shrink a bit and the company didn't go after some low margin deals in China. Finally, the 2018 compares were tough as it had 20-40% growth in 2018. Dell still grew revenues in North America and APAC ex-China.

As for the PC business, Dell delivered first quarter revenue of $10.9 billion, up 6 percent from a year ago. Commercial sales were up 13 percent, but consumer revenue was down 10 percent. Operating income for the client solutions group was $793 million.

VMware, which is owned by Dell, had first quarter revenue of $2.3 billion, up 13%. Operating income for VMware was $614 million. VMware is Dell's linchpin to its cloud and data center strategy as well as its cash cow.

Here's a look at Dell's other businesses including Pivotal. 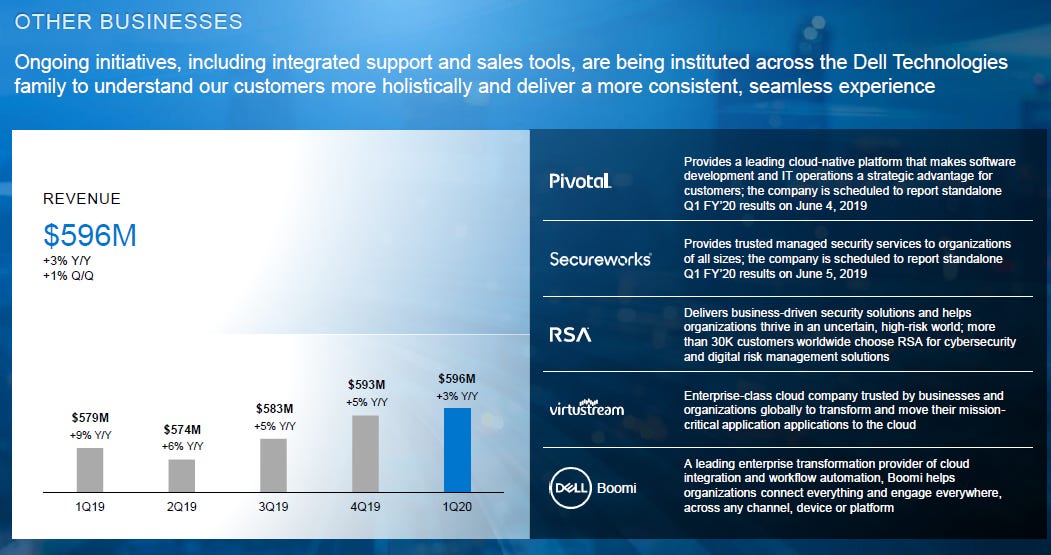