X
Innovation
Why you can trust ZDNET : ZDNET independently tests and researches products to bring you our best recommendations and advice. When you buy through our links, we may earn a commission. Our process

Another year, another XPS that is the laptop to beat if you don't want a MacBook.
Written by Chris Duckett on Oct. 14, 2021 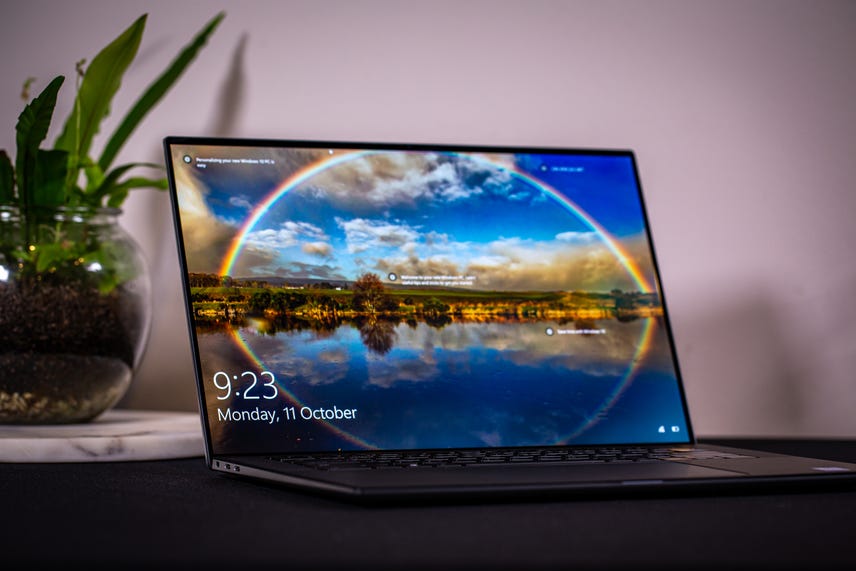 The difference between last year's XPS 9500 and the 2021 XPS 9510 depends on where you look. Externally, it looks exactly the same, and internally it is merely updating the silicon, but one of those upgrades make all the difference: The inclusion of a GeForce RTX 3050Ti.

If this device still used its previous Nvidia GTX series GPU, it'd be quite ho-hum, but ray-tracing moves the capability up a strata.

And when you are on top, you sometimes don't need to change everything to stay there, it can be entirely acceptable to keep playing your winning hand.

In Australia, the XPS 9510 retails for AU$4,300, which might seem pricey but its nearest competitor, the Lenovo Thinkpad X1 Extreme Gen 4 with the same chip, memory, storage, and GPU but only has a 2560x1600 IPS display arrives with a sticker price of AU$4,600.

For that money, the design is familiarly stylish without being fancy. The carbon fibre matte weave around the keyboard might not be to everyone's taste, but it does a good job of hiding fingerprints and smears that mark other devices. The outside of the XPS is covered in its standard metallic chassis.

It's always nice to know exactly where sounds are coming from, and the XPS goes some way to telling you, thanks to speakers grilles beside the keyboard. However, speakers do also live under the aforementioned matte rest either side of the trackpad.

As for the trackpad, it is a very welcome upsized version compared to most other devices -- it's nice to see a laptop maker sensibly use the space available to laptops that surpass the ultra-portable 13-inch barrier.

Display-wise, the screen has delightfully thin bezels and helps the laptop feel bigger than it is. There is, however, one big drawback that is almost inexcusable in a premium device in the 2020s -- it lacks a physical webcam cover. In the age of endless video conferences, not having physical assurance that no one can see you is anxiety-inducing.

The end result is that no matter how pretty the XPS 9510 looks, it's likely to have a $5 third-party stick-on webcam cover attached to it, a piece of tape, or a sticky note. It's a crying shame because this is a nice bit of kit to look at.

The addition of an RTX GPU will not turn this machine into an unbeatable gaming rig, but it is a significant upgrade on the GTX, and means that the laptop will be passable for a couple of years yet, especially for the more powerful options available in the 17-inch XPS. If you want a discrete GPU altogether, then the cheaper 13-inch XPS is probably your best bet, and you'll also get to enjoy the better Xe integrated graphics.

Unlike some other systems with discrete GPUs, the XPS does not run at skin-burning levels of heat. It's hot, no doubt, but the potential for searing is a lot less on our review model.

When it comes to ports, the XPS 15 offers 2 Thunderbolt 4 ports on the left and 1 USB-C 3.2 Gen 2 port on its right that all cater for DisplayPort and are able to power the device. On the right side, the XPS also has a full-sized SD card reader.

In the upper right of the keyboard lives a completely blank key that functions as the power button and fingerprint reader. As a fan of this combination in smartphones, it should hardly be surprising that I also like it in laptops.

Most ZDNet writers prefer this notebook above all others

If you spend hours daily banging away at a keyboard, you'll want to consider these favored models.

The XPS 9510 has a 56 watt-hour battery on the smallest display size, and otherwise an 86 watt-hour battery. Using the unobtainable combination of a small display and larger battery, Dell claims it was able to get in excess of 13 hours at 40% brightness.

In the real world with an OLED screen, full brightness, and some music blaring, seeing 15% of the battery disappear in an hour was nothing exceptional, and once that discrete GPU kicked into gear, it was off to the races as the percentage ticked down. Compared to the ThinkPad X1 Extreme Gen 2 I had years of experience with, the newer laptops drain power much more slowly even though the performance is much higher.

How does Linux go?

At the end of 2019, I detailed the pain with the aforementioned X1 Extreme and its graphical-related pain.

Fast forward almost two years and thoughts of constructing a multipage tutorial to get Linux running on this machine have had to be parked. It just mostly works.

It's far from seamless, and not the sort of thing you could hand to the average user, but if you are technical enough to not be scared of a bash prompt, you'll be fine.

Once Secure Boot was switched off to allow the Nvidia modules to be injected while booting, using the laptop with the latest version of Fedora was a dream compared to how it used to be.

The discrete GPU will run apps happily under Wayland -- it does feel like it's taken forever to be able to say that -- however, it predictably sucks down the power. Quite rightly, Steam will launch on the Nvidia GPU, but just keeping the Steam library page open is a power drain. In one hour, while otherwise browsing and using the terminal, having the Steam library page open sucked down 30% of the battery. Hardly the best result, but as mentioned before that's an improvement, and obviously using the Nvidia GPU to play a game hits the battery harder.

But by and large, it was a success. Other problems I've seen discussed around this model did not crop up: The fingerprint reader and webcam worked, the screen brightness was tickety-boo, and the touchpad was fine once I worked out Gnome Tweaks had played with the settings and switched right-clicking on the right side for two-fingered presses.

The only warning I can issue is that Linux does not handle scaling anywhere near as well as Windows; occasionally, there will be apps rendered completely unscaled and results in very small fonts. This won't surprise any long-term Linux users, but be aware that the Grub menu is extremely small, and I'm glad I didn't need to type out menu entries.

If you can dismiss the M1 line of MacBooks, then the Dell XPS 15 9510 is the standard against which other laptops are measured.

While it may cost a king's ransom, for that money you get premium build, components, and a laptop that will be able to handle workloads for years to come. It's good to be king, and it's a title the XPS has yet to abdicate.