Even though owning Nokia's devices business will make Microsoft the largest hardware Windows Phone player, Microsoft hopes to continue licensing the platform to other partners. 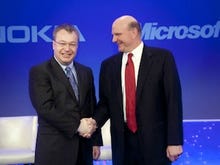 "Today's announcement doesn't change that – acquiring Nokia's devices group will help make the market for all Windows Phones, from Microsoft or our OEM partners," Microsoft's EVP of operating systems, Terry Myerson wrote in a blogpost.

As Myerson notes, Microsoft's partners "bring innovation, diversity and scale to Windows", but when it comes to Windows Phone, only Nokia has delivered all three.

The acquisition may raise questions questions of fair play that Google faced after acquiring Motorola, but Myerson addressed this by countering that Microsoft treats all Windows OEM partners equally to its own hardware business.

"We collaborate with our Microsoft hardware teams in the same way we partner with our external hardware partners: we discreetly discuss technical and business opportunities, make shared bets, empower each other to do great work, and then operate closely together," he wrote.

In mobility, to date, that has only meant treating its Surface business the same as other tablet companies, but the proposition of licensing Windows Phone could be more awkward given Nokia's total dominance of Windows Phone mirrors Samsung's of Android .

Join Discussion for: Even with Nokia devices, Microsoft wants...