Here's how the social media giant is updating privacy policies ahead of the EU's new data law.
Written by Steve Ranger, Global News Director on April 18, 2018 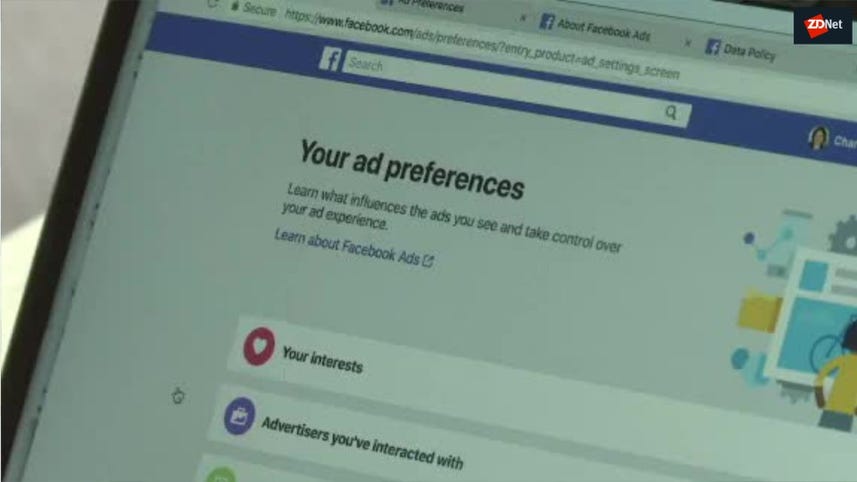 Facebook is updating privacy options for users ahead of Europe's strict new data legislation, which comes into force next month.

Facebooks's chief privacy officer Erin Egan said the company will be rolling out the new options in Europe this week, ahead of the arrival of the the European Union's General Data Protection Regulation (GDPR). However, the changes will have implications beyond Europe; Facebook said that all users would be asked to review some of their Facebook data privacy choices.

All users will be asked to decide whether they want to see ads based on data from partners -- such as websites and apps that feature the Facebook 'Like' button. "We'll ask people to review information about this type of advertising, and to choose whether or not they want us to use data from partners to show them ads," Egan said. Users will also be asked if they want to continue sharing political, religious, and relationship information on their profiles.

In Europe and Canada, users will also be given the option of switching on facial recognition once again.

This allows users to tag themselves in images and find other images that include their face. Facebook argues that this feature will help protect privacy -- by detecting when others might be attempting to use your image as their profile picture, for example -- and allowing us to suggest friends you may want to tag in photos or videos. This service was switched off in Europe back in 2012 over privacy concerns.

Facebook said that while the substance of its data policy is the same globally, EU-based users will see specific details, such as how to contact its Data Protection Officer under GDPR.

People in the EU will start seeing these requests this week ahead of GDPR coming into effect on May 25, with the rest of the world getting these options later.

The company said the new Settings and Privacy Shortcuts features announced last month were built with GDPR in mind: these tools for accessing information will allow people to see their data, delete it, download and export it.

The updates to the privacy policy come at a difficult time for the social media and advertising giant. Facebook recently confirmed that up to 87 million users had their data improperly shared with political consultancy Cambridge Analytica. Consumer groups and politicians are increasingly concerned about the amount of data held by social media giants and the use to which it's put.

What's not clear is the long-term impact of such revelations on the amounts of personal data we are willing to share on, and with, social media. Facebook users' response to the privacy review and facial recognition will be a good indicator of how much they still trust social media companies.