Intel's artificial intelligence partnership with Ferrari, announced at CES 2018, will involve aerial footage captured via drones, which will then be mixed and curated to create personalised feeds.
Written by Corinne Reichert, Senior Reporter on Jan. 11, 2018 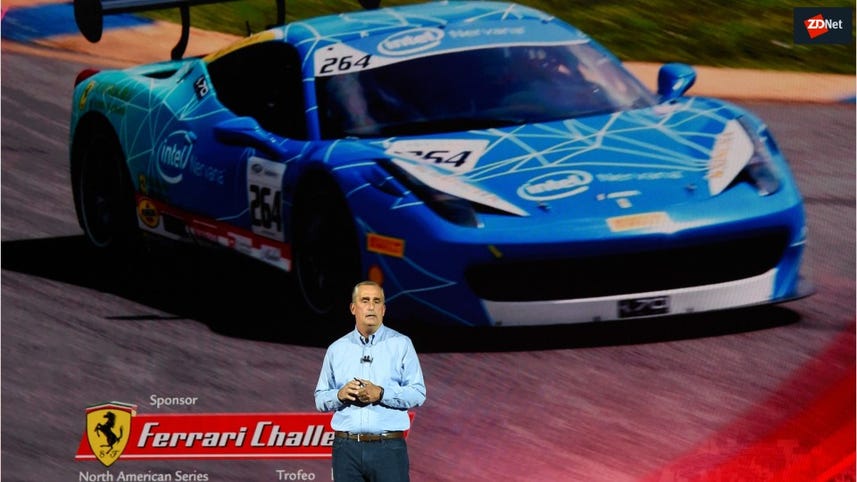 Intel's partnership with Ferrari will drive the advent of artificial intelligence (AI) to "fundamentally" change the creation and distribution of sports broadcast content, the tech giant has said.

Announced by Intel CEO Brian Krzanich during his CES 2018 keynote, the three-year partnership with Ferrari North America will see Intel AI tech including the Intel Xeon scalable platform and the Neon Framework used, along with aerial footage captured by Intel drones.

VP and GM of Intel's Artificial Intelligence Products Group (AIPG) Naveen Rao told ZDNet that the Ferrari partnership is something Intel began working on over the past year after recognising that using the data collected from Ferrari Challenge North America cars as a data source would provide "novel" insights.

"It's not something I've seen anybody apply AI techniques to, and we had a vision of saying, 'you know what, we can actually fundamentally disrupt motorsports'," Rao said.

The project began when Intel looked at the "antiquated" way in which motorsport is currently televised, as well as the infrastructure cost inherent in deploying fixed cameras around each track throughout the race calendar.

"We said, 'How can we make this a lot cheaper by using drones and then using AI on top of it?' and what's more, I think we can actually start to drive new experiences like personalised feeds," Rao explained to ZDNet.

"If you care about a particular driver, we can actually make a personal feed for you that will actually cut some different interesting things relevant to that driver or that situation or that team. So that's where I think it's a novel and a kind of really interesting application of AI."

Multiple camera feeds from drones will stream this to a central source, with the AI then mixing and cutting the feeds together.

"There's an AI system that actually is monitoring them and saying 'this is interesting, and that's interesting', and cuts between them. We want to start automating that whole thing, and eventually all of those sources are streamed to a datacentre and you can then find what you think is interesting -- it'll curate a custom feed for you," he added.

The partnership will also provide real-time analytics insights for the Ferrari team to use in honing its races.

Speaking on Intel's Nervana neural network processor, Rao said Intel wants to unleash "all our smart people" both internally and among its close partners including Facebook to work on improving the system as part of what he called an "active engineering loop".

"What we're doing with Nervana is not just a chip; it's an entire stack. It allows external and internal folks to get access to these tools and add value to their problem right away," he said.

"Even internally, we're working with IT to make resources available, to make datasets available, because ultimately, we want all the smart people at Intel to be able to attack this problem and hopefully they'll build better products.

"We have multiple [Nervana] generations in the pipeline today."

Intel is also currently engaged with the US government on approaching AI, and is actively talking to Congress to ensure it is informed on potential trends and what to expect.

According to Rao, however, many base AI technologies will take five years to come to fruition and be applied to products.