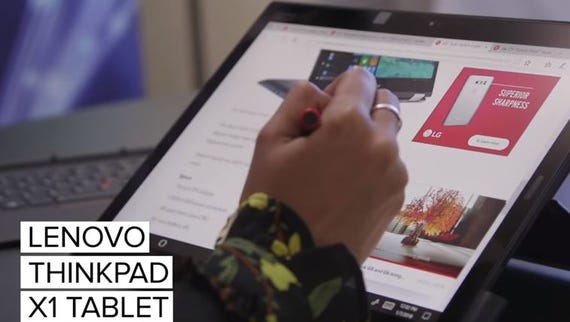 Video: Lenovo ThinkPad X1: A tablet PC with a killer keyboard grows up

If Apple's keynotes represent the tech world according to one company, CES often represents the rest of the world's reaction to them. After the launch of the iPad in 2009, the following CES events were awash in so many tablets that you couldn't elbow your way around an aisle corner without bumping into one.

At CES 2018, top-tier corporate PC makers HP, Lenovo, and Dell all announced new PC models. But while their output provides no shortage of highly mobile computing devices, you won't find any slates in the mold of the unadorned iPad.

In one respect, the big three PC makers' move away from slates is unsurprising given that two of the three have entirely dropped devices using Android, the default operating system for such products.

But it also reflects how business people in particular have largely clung to the advantages of the clamshell despite a multi-year assault on the benefits of touch and the optimization of computing for it. Even Samsung, the most successful Android tablet maker, particularly for businesses, showed at CES how it's shifting more of its pen-enabled functionality into its notebooks.

The iPad's initial rocket launch spurred Microsoft to create an isolated tablet experience within Windows 8, one it has integrated much better into Windows 10. Convertibles like the Lenovo Yoga that allow the keyboard to fold behind the screen create extra thickness make for a thicker, heavier tablet experience. Detachables like the Surface Book that allow the screen to separate from the body need heavier keyboard bases or Surface Pro-like kickstands to counter the electronics -- primarily the battery -- that must live in the screen for independent operation.

Even as the cost of detachables has come way down, though (products like the Nextbook Ares available for less than $200 provide basic productivity and content consumption), the market has been turning more toward convertibles.

At CES 2018, HP has introduced an Intel-based version of the Envy x2 Always Connected PC it bowed with Qualcomm just last month and Lenovo has announced the third generation of its Thinkpad X1 tablet as well as its Qualcomm-based Miix 630; both are kickstand-brandishing affairs that have followed the core design of the Surface. And while Lenovo still sells Android tablets, the closest thing it has announced to a traditional tablet form factor at CES has been a Google Smart Display.

But most of the attention has focused on convertibles such as the Dell XPS 13 and the Lenovo X1 Yoga. There are a few reasons for this, including what remains the superior lap stability of clamshells and Windows' app catalog favoring traditional interfaces to touch ones. Also, the iPad, particularly with a Bluetooth keyboard case or cover, is a stronger competitor to a Windows-based slate or detachable than a clamshell or convertible.

It may be little more than symbolic but, ten years after the launch of the iPhone that ushered in the modern touch era, we are seeing a retro effort to integrate a clamshell keyboard into an Android smartphone by the developer of the Psion 5 PDA and a first credible attempt to turn an e-reader into a fancy typewriter via an integrated (albeit detachable) keyboard.

The Windows resistance has come full circle. Apple still ships iPads without keyboards or kickstands. While it has been adopted by many as a primary computing device, though, it is often done so with a detachable keyboard, making the difference between it and a Windows detachable semantic at least as far as purpose-driven functionality is concerned.

Last summer, I wrote about how the iPad's evolution resulted in an identity crisis before Apple did more to make iOS on the iPad more competitive with the workflow of windowed interfaces. As Windows' tablet appeal has failed to take off, the iPad's laptop competitiveness has improved as it has an increasingly diverse and deeper set of apps. Microsoft's own Surface product family evolution reflects the evolution -- moving from the Surface Pro slate to the Surface Book detachable to the traditional clamshell of the Surface Laptop which lacks even a wraparound mode.

The bottom line is that, while the iPad has moved the needle, its biggest net impact on the bulk of the mobile computing market has been mostly confined to allowing a hinge to rotate fully so as not to disrupt the intractable clamshell experience. For now, anyway, the idea of the original iPad as a clean sheet of glass as an ideal to which computing is navigating has been, at best, pre-empted.

CES 2018 PC preview: What to expect from laptops, desktops and tablets

From hybrid designs to hybrid components, everyone is taking an expansive view of what makes a PC.

With iOS 11, the iPad finally grows up

The product launched to fit between a smartphone and laptop has shifted hard toward the latter. But it's too late to make amends for its misspent youth and overtake Windows 10 2-in-1s.

Join Discussion for: At CES 2018, tablets are out, convertibles...