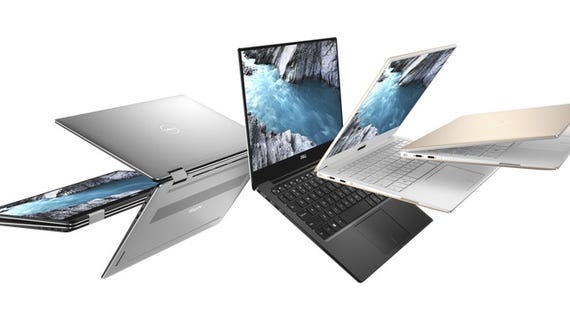 Frank Azor, VP and GM of XPS, Alienware, and Dell Gaming, called it the most powerful 2-in-1 ever produced thanks to a partnership between Intel and AMD.

"That's allowing us to give you a 15-inch 2-in-1 that's about 16 millimetres thick and delivers remarkable performance."

The XPS 15 (9575) is powered by a choice between an 8th-generation Intel quad-core i5 or i7 processor, which features Radeon RX Vega M GL graphics with 4GB of HBM2 RAM; runs Microsoft Windows 10; and has a 3,200x1,800 15.6-inch UltraSharp 4K Ultra HD InfinityEdge touch display.

It also comes kitted out with a 75Wh battery with 15 hours of battery life; edge-to-edge Corning Gorilla Glass 4; two Thunderbolt 3 ports, two USB-C 3.1 ports, and a microSD card reader; an optional Windows Hello-compliant fingerprint reader in the power button; 802.11ac wireless with optional vPro functionality, and Bluetooth 4.1, as well as Miracast capability; 8GB-16GB dual-channel DDR4 at 2400MHz on-board and 32GB post-RTS; and GORE Thermal Insulation to improve performance by moving heat out of the device to keep temperatures down.

The XPS 15 is available in the same platinum silver aluminium with black carbon-fibre composite palm rest as the previous model, with Azor telling ZDNet that the plan is to guage consumer interest in a white finish before it extends the use of the white crystalline material it helped invent for the new XPS 13 to the XPS 15.

"We may introduce new colours in the future, depending on what our customers would like to see from us. If white is in demand, we will absolutely consider it," he told ZDNet.

The XPS 15 comes with a magnetic maglev keyboard, as well as being compatible with the newly announced Dell Premium Active Pen, which magnetically attaches to the 2-in-1.

"We'll also be using a brand new maglev keyboard, which is a completely different keyboard construction ... it uses magnets to give you the responsiveness that you've come to expect from the best notebook keyboards," Azor told media.

The Dell Premium Active Pen will be priced at $99.99 and become available on April 6 in the US and June 12 globally.

"The Dell Premium Active Pen was created with 4096 pressure sensitivity for fine control to create strokes of varying lightness or darkness and low latency or lag for a more natural writing experience," Dell explained.

"Tilt support allows for more detailed shading when you draw. The top button instantly launches OneNote, captures a screenshot, or activates Cortana; two barrel buttons efficiently erase or launch the context menu; and the Quick Launch button allows you to quickly and conveniently take notes by writing on the locked screen."

Dell also used CES to announce two new Thunderbolt 3 storage devices, one with 500GB capacity that will sell for $439, and one with 1TB capacity for $799, which will both become available on February 28.

Thunderbolt 3 technology supports bandwidth of 40Gbps, with Dell citing transfer speeds of up to 2,650MBps.

The new Inspiron, available as of January 9, includes support for all premium virtual reality (VR) headsets on the market for $799 -- or $749 for those who don't want a VR configuration.

The big consumer electronics show kicks off on Jan. 7 in Las Vegas. Here's a rundown of trends to watch for at CES 2018.

Intel has combined 4GB of high-bandwidth memory gen 2 with AMD's Radeon RX Vega M Graphics on its 8th-generation core processor, available in core i5 and i7 configurations.

Dell's new Latitude 7490 uses an active steering antenna to improve Wi-Fi performance by 155 percent, while its Latitude 5285 notebooks will begin shipping with motherboards made from gold e-waste as of March.