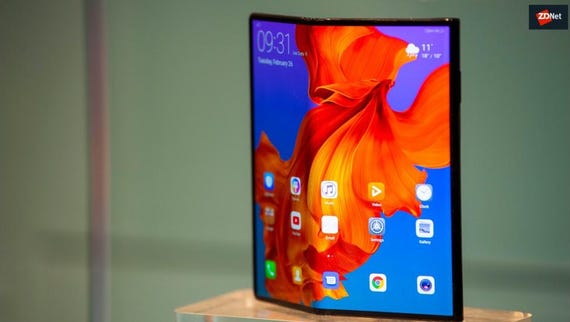 Foldable smartphones were the big story at this year's Mobile World Congress. Samsung actually got in before MWC even kicked off with its Samsung Galaxy Fold, but Huawei grabbed attention at the show by launching its Mate X at a huge press conference at the Italian Pavilion, just off the iconic Plaça d'Espanya.

Neither phone is cheap — the Samsung Fold is set to cost $1,980, while the asking price for the Huawei Mate X is even higher at around $2,600 — but both generated a lot of interest inside the Fira Barcelona Gran Via and, perhaps even more crucially, outside of it with the devices major talking points across the media.

At both Samsung and Huawei's stands — which sat opposite one another on the show floor — crowds gathered around to see the foldable phone. Both of which were protected in glass cases, away from the prying hands of the general public.

While some press got a behind the scenes hands-on with with Huawei Mate X and Huawei did offer a chance for the general public to see the device being used by stand staff, Samsung's foldable was only visible behind the protection of a glass case. After MWC Samsung did release more details about the Fold, but the decision to be so secretive about the device in Barcelona may have put the South Korean firm a step behind its Chinese rivals. Touching and folding these devices is what people want to do and Huawei allowed users to get that little bit closer.

But what's the business strategy here? Is there a real use-case for foldable phones — for either consumers or the enterprise — when these devices become available later this year?

Huawei thinks the killer combination is a screen which folds out to eight inches across — almost the size of a tablet — and 5G data connectivity. One of the themes of its presentation was that this can be deployed by the enterprise, allowing remote workers to conduct business much more easily, thanks to the dual screen of the foldable phone and the ability to look at more than one application at once.

It's quite easy to see why this would be appealing, but will users or businesses want to fork out over $2,000 for a little boost in productivity? Probably not — especially when it's likely the phone will be in its folded position most of the time.

And Huawei also spent quite a lot of time talking about the camera on the device. The foldable nature of the Mate X screen means the user can see the photo they're going to take, before they take it. Sure, that might appeal to the high-profile Instagram influencers, but is that enough of a selling point for a $2,000 smartphone? It seems far-fetched.

Predicting the future is hard; and it's worth remembering that in the just over a decade since smartphones first emerged, they've revolutionised how people use the internet and interact with the world around them — nobody thinks twice about opening their work emails on their smartphone, rather than their laptop or PC.

But after my first, limited encounters with foldable phones it's hard for me to see foldable phones as a must-have device that's going to forever change the mobile industry. They're cool to look at, but that's all we've been able to really do so far — look at them.

On the one hand, it's a 5G-powered enterprise tool, on the other hand, it's a new way of taking selfies: the two audiences don't cross over much, which suggests that getting the device out there is seen as the key goal, with the hope that people find a reason to take it up later. That may well happen or it may not.

With a $2,000 price tag, it's difficult to see how these devices are going to gain a mass audience any time soon. When the price comes down, maybe that will change, but for now, the devices appear to be designed to mostly just drive conversation about the mobile industry. In that way, they've been a success already. But I'm still trying to bend my mind around that idea that foldable smartphones will be seeing mass adoption any time soon.

Join Discussion for: Foldable phones: Why they won't change the...