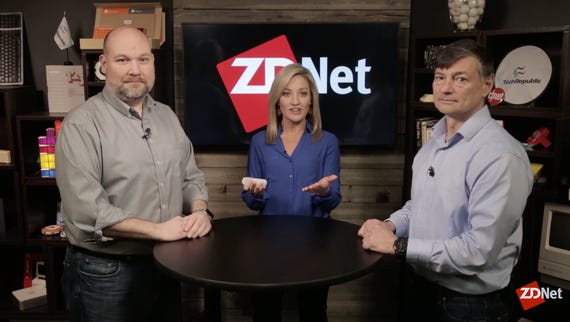 Huawei has launched its foray into foldable smartphones, with the Huawei Mate X officially unveiled at Mobile World Congress 2019 as a competitor to Samsung's Galaxy Fold and a device that could focus on productivity.

Huawei CEO Richard Yu had previously hinted at a foldable phone during an investor meeting in January and he was on stage in Barcelona to showcase the Mate X and its foldable screen at a conference session.

It offers "an expanded view in one hand," said Yu. "Other foldable phones are like two phones together, this is just one phone," said Yu.

Huawei appears to be positioning the Mate X foldable smartphone as a productivity device, offering users the ability to browse multiple tabs or files at once when performing workplace tasks. "This looks like you're using a tablet, but it's much lighter than a tablet," said Yu.

The Huawei Mate X is the second foldable smartphone to be unveiled in the space of just a few days — Samsung pipped Huawei to the post to be first to reveal a foldable device, the Galaxy Fold. Like the Galaxy Fold, there's a price tag issue. The Mate X will run $2,600 for three cameras and three screens. CNET's Jessica Dolcourt said:

Huawei's vision for the Mate X is of a phone you mostly use in its "closed" position, but open up when you want to be entertained or more productive.

There's a key difference between the two phones, however: the Galaxy Fold folds in on itself like a book, with the screen inside the device when it is closed. The foldable screen of the Huawei Mate X is folded around the outside of the device, with the help of a patented hinge with over 100 components, the company said.

Yu was also keen to stress that the Mate X has a larger screen than the Galaxy Fold — 8-inches across. Compared with the Samsung device, Huawei said the Mate X is also thinner when folded than it's big rival: 11mm compared with 17mm.

The 5G on the device also appears to be a move to place the phone as an enterprise tool, offering users high speed downloads, as well as fast charging speeds. The connection is also said to provide encryption for more privacy and security when using the Mate X. The company said a 30-minute charge can add 85 percent battery power to the phone.

A cover is also offered for the device in order to protect it from damage. The cover bends around the fold.

The Mate X also fits in with Huawei's plans around 5G, with the new foldable phone touted as an exclusively 5G device with the company boasting it can take advantage of what they describe as the most powerful 5G on the market.

Huawei featured 5G heavily in the presentation, with a variety of Internet of Things and connected-home devices displayed, along with a 5G mobile hotspot.

Also: What is 5G? All you need to know about the next generation of wireless technology

Huawei also unveiled the Huawei Mate XP Pro laptop, offering users what Yu described as a "borderless experience" with a 3:2 aspect ratio. "It's better for productivity over 16:9, better for performing, better for reading documentation," said Yu.

Other new hardware includes the Matebook 14, a 14-inch touchscreen laptop that Huawei said can be used for 14 hours without charging for office work. It appears to be designed for high-power enterprise users who need to have long batter life.

The new hardware has been launched alongside Huawei Share OneHop, a wireless means of sharing files fast between compatible devices. Tapping a phone against a laptop transfers the file immediately and also works with clipboard items, pictures and videos.

Using Intel's 5G mobile trial platform and Ericsson's software, the two have proved they can run 4G and 5G traffic simultaneously on the same frequency carrier.

NEC has unveiled its 5G base station radio units ahead of Mobile World Congress 2019 this week.

Perhaps the biggest perk of the VIVE Focus Plus is that companies can easily port their PC VR based content to HTC's new system.

The cell phone industry looks to bounce back at MWC 2019

With the smart phone industry struggling as of late, it can be expected that MWC 2019 will produce all sorts of oddities to tempt buyers.

LG to unveil first 5G smartphone with Snapdragon 855 at MWC

LG's yet-to-be-named first 5G smartphone will be unveiled on February 24th at Mobile World Congress, sporting a Snapdragon 855 processor, a vapour chamber, and a 4,000 mAh battery.

Verizon will launch 5G in 30 cities this year, and both offices and remote workers stand to benefit.

It's trying to change the conversation.