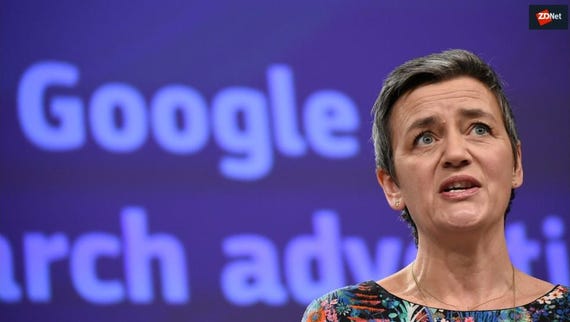 Forty-one of Google's European online-shopping rivals have written a letter to Europe's competition regulator asking it to take action against the advertising and search giant for violating a 2017 anti-competition ruling over Google Shopping.

Reuters reports that the letter, addressed to European Commission competition boss Margrethe Vestager, says Google hasn't complied with her order for Google to stop favoring its own price-comparison service, Google Shopping, over rivals.

Vestager in 2017 handed Google a then record €2.42bn ($2.72bn) fine for abusing its dominant search engine to promote its shopping service.

The complaint from the 41 online shopping rivals comes as Vestager's team investigates whether Google similarly favored its job-search business, Google for Jobs. Vestager confirmed the jobs search probe in August.

The letter has been signed by Axel Springer-owned Idealo, Polish price-comparison site Ceneo, Kelkoo and Foundem from the UK, and Czech site Heureka.

Foundem's founders Adam and Shivaun Raff were the lead complainant in the EU's Google Shopping investigation, but some of the signatories in the new letter are raising concerns for the first time.

The companies argue that they are "endangered by Google, which is artfully avoiding compliance with the law".

Earlier this month Vestager said Google's auction-based response to the EU online shopping fine appeared not to have led to more traffic to its competitors.

Under Google's compliance proposal, comparison shopping sites (CSSs) can run product listing ads in Google Shopping results. CSSs bid for placements in an auction against each other and Google Shopping, which following the EU fine operated as a separate business unit in Europe.

The 41 companies argue that Google's alleged non-compliance will mean more CSSs "will be forced by Google to exit the market".

"Since Google ranks and displays its shopping unit more favorably than competing CSSs in its search pages, the identified abuse has never been terminated," the companies said.

The companies say Google's attempt to present its measures as a compliance mechanism actually make matters worse for its competitors.

Foundem this month published a new presentation to substantiate its argument that Google's auction is "a thinly-veiled continuation of exactly the same anti-competitive conduct already defined and prohibited" by the EC's 2017 decision.

Google said the 41 companies that signed the letter to the European Commission represent only 6.8% of the total number in the CSS program.

"We're seeing positive results from our shopping remedies with 600 comparison shopping services participating in the program," a Google spokesperson said.

"Over 28,000 merchants in Europe are currently placing Shopping ads through these third-party comparison shopping services, leading to more choice for merchants and consumers."

More on Google and competition