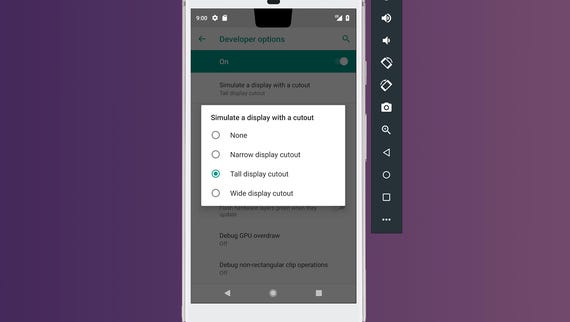 Google has announced Android P, the next major version of its mobile operating system.

Google launches Android One, eyes emerging markets Android One is an initiative to define reference platforms so original equipment manufacturers can more easily build phones that'll sell for less than $100.

The updates provided in a blog post mostly cover updates and tools for developers to begin building apps for the new OS. The company has stated it will continue to update the beta and release new builds often, with more news promised in May from Google I/O.

Google has added Display Cutout support to Android P, meaning the iPhone X-like notches and Android lookalikes are here to stay. Using the new tools, developers can build apps that automatically work around any cutouts, without having to worry about important information or navigation features being hidden by the cutout.

Updates to video playback and image compression are also coming to Android P. Google is adding support for HDR VP9 Profile 2 and HEIF for developers to integrate into their apps. The same goes for a new Multi-Camera API that's for devices with dual rear-facing cameras or dual front-facing cameras.

One of the more notable features touted by Google is new messaging notifications. The rich notifications improve upon Android's current notifications by adding more context and potentially suggested replies.

Other notable features include the ability to track users indoors (with proper permissions) using Wi-Fi Round-Trip Time (RTT), as well as improvements to autofill, the Neural Networks API, and power efficiency.

Starting with Android P, Google is taking steps to ensure developers aren't using private APIs when developing apps. In November of 2018, all apps submitted to the Google Play Store will need to target Android Oreo or newer. Also, at some point in 2019, all apps will need to support 64-bit hardware.

Naturally, security and privacy are also a big part of Android P. You can read more about what the update adds on both fronts right here.

Users with a Google Pixel, Pixel XL, Pixel 2, and Pixel 2 XL can participate in the developer preview. You will need to manually download and then flash it to your device. If you don't know what that means, then it's a good sign you need to wait until Google opens up its normal Android public beta program later this year. The official release of Android P should follow sometime in the fall, if you'd rather skip beta testing altogether.