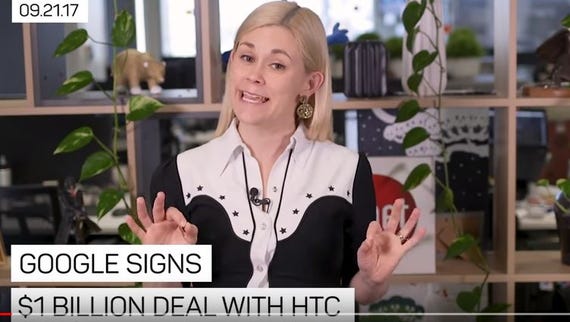 Google has announced a definitive agreement that will see certain HTC employees joining the search engine giant for a cost of $1.1 billion in cash.

Separately, a statement from the companies has said Google will receive a non-exclusive licence for HTC intellectual property (IP), which is expected to support the Pixel smartphone family.

"The agreement is a testament to the decade-long strategic relationship between HTC and Google around the development of premium smartphones," the statement said.

Many of the staff that Google will acquire from the Taiwanese consumer electronics manufacturer are already working with Google to develop Pixel smartphones, the companies said.

"HTC has been a longtime partner of Google and has created some of the most beautiful, premium devices on the market," said Rick Osterloh, senior vice president of Hardware at Google.

"We're excited and can't wait to welcome members of the HTC team who will be joining Google to fuel further innovation and future product development in consumer hardware."

The transaction is still subject to regulatory approvals and customary closing conditions; however, should the deal progress smoothly, it is expected to close by early 2018.

Google's HTC deal: Can Google learn from its Motorola miscues?

Google wants more hardware manufacturing heft, but it's unclear whether HTC will be the magic potion the search giant is looking for.

The suspension of activity on the stock exchange is being keenly watched in anticipation of a takeover.

Google Pixel 2 and Pixel XL 2: Everything you need to know

Google is rumored to partner with HTC and LG for its next iteration of the Pixel lineup. Here's a round up of the latest rumors.

Join Discussion for: Google pays $1.1b for HTC staff and IP