Google wants more hardware manufacturing heft, but it's unclear whether HTC will be the magic potion the search giant is looking for.
Written by Larry Dignan, Contributing Editor on Sept. 20, 2017 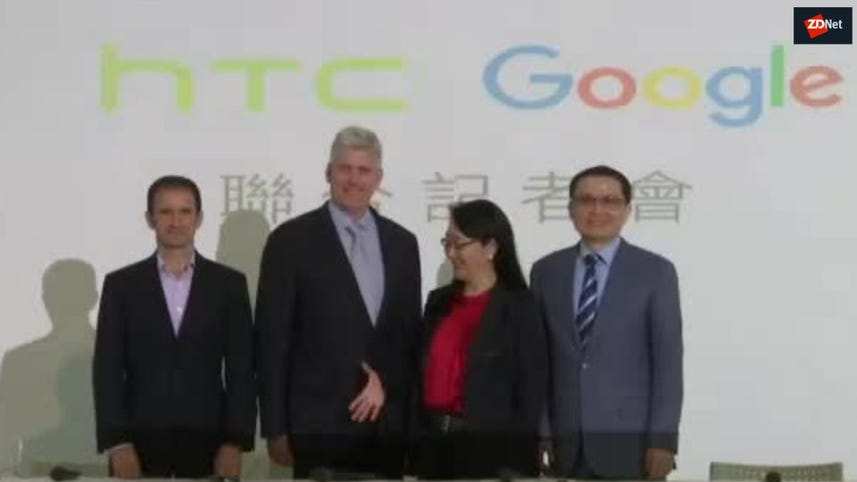 Google is serious about manufacturing its own hardware...again.

Google has acquired "certain HTC employees" mostly working on the Pixel smartphones and a non-exclusive license to intellectual property in a move that foreshadows that it is serious about integrating software and hardware. HTC gets $1.1 billion and said it will continue to manufacture smartphones under its brand as well as its VIVE virtual reality system.

The purchase of HTC's division isn't likely amount to much--HTC is valued at $1.9 billion--but Google would acquire a supply chain, research and development and skills that would be hard to create in-house. HTC had already halted shares pending an announcement.

If this HTC deal sounds vaguely familiar that's because it was only a few years ago that Google bought Motorola for $12.5 billion and then offloaded it to Lenovo for $2.91 billion. The Motorola purchase had a lot to do with hardware knowhow, but more to do with defending patent lawsuits.

What's different this time? Beyond a smaller wad of cash and a structure that's more win-win, I'm not so sure. Google probably realizes hardware is a conduit for its artificial intelligence, ads and Android. Cue the Amazon Alexa envy. But that reality doesn't mean Google can integrate HTC well or even keep the talent acquired.

Richard Windsor, an analyst at Edison Investment Research, said in a note:

Google - Thrice bitten, never shy. Fourth time unlikely to be the charm. Google has announced a partnership with HTC that sees some key engineering talent join Google but it remains a complete mystery as to what Google is paying money for.

This will represent the fourth major hardware related transaction that started with Motorola Mobility and continued with Nest and Dropcam.

These deals all had two things in common. Firstly, all of the acquired companies have felt great discomfort being owned by a company that does not really understand hardware. The result was infighting and a failure to use Google's strengths to increase market share of the products in question. Secondly, in each case the real beneficiaries of the transactions were the owners of the assets being sold, leaving Google shareholders considerably worse off. Even with highly hardware-experienced management, these assets have struggled to perform, leaving me with the impression that just being inside Google is enough to put good hardware people off their game.

In the HTC statement, it's clear that the Taiwan smartphone maker is optimistic about the financial boost it just received. Cher Wang, CEO of HTC, said:

This agreement is a brilliant next step in our longstanding partnership, enabling Google to supercharge their hardware business while ensuring continued innovation within our HTC smartphone and VIVE virtual reality businesses.

HTC and Google have been strong partners. HTC is a supplier for Google's Pixel line. What's unclear is whether HTC can continuously offer premium hardware that can serve as a showcase for Google's services. HTC's sales have crumbled since peaking in 2010.

Add it up and Google will face its challenges with HTC. Then again, Google is throwing a financial lifeline to one of its key hardware partners.

Here's how the ledger looks:

Why HTC is a dumb purchase