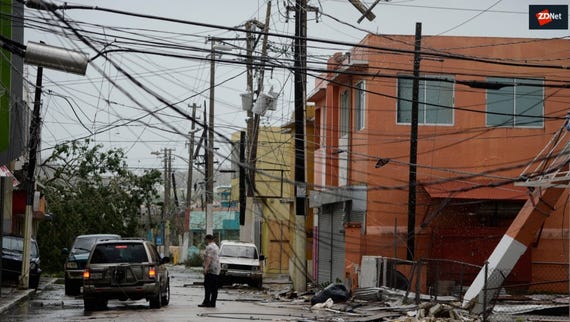 The licence [PDF] allows Project Loon to deploy its network of balloons using spectrum in the 900MHz band, having obtained consent from the existing carriers in the US territory.

"That's why we need to take innovative approaches to help restore connectivity on the island. Project Loon is one such approach. It could help provide the people of Puerto Rico with access to cellular service to connect with loved ones and access life-saving information.

"I'm glad the FCC was able to grant this experimental license with dispatch and I urge wireless carriers to cooperate with Project Loon to maximise this effort's chances of success."

The special temporary licence is "needed to support licensed mobile carriers' restoration of limited communications capability in areas of Puerto Rico and the United States Virgin Islands (MTA025) affected by Hurricanes Irma and Maria", the licence says, and is eligible between October 6, 2017 and April 4, 2018.

According to the FCC, all 78 Puerto Rican counties are still affected [PDF] by communications service outages as of October 8 in the aftermath of Hurricane Maria.

"Overall, 81.7 percent (virtually no change from 81.9 percent yesterday) of cell sites are out of service. All counties in Puerto Rico, except Bayamon, Catano, Carolina, Guaynabo, San Juan, and Toa Baja, have greater than 75 percent of their cell sites out of service," the FCC said on Sunday US time.

"22 (same as yesterday ) out of the 78 counties in Puerto Rico have 100 percent of their cell sites out of service. Wireless communications providers are deploying to Puerto Rico Cell Sites on Wheels and Cell Sites on Light Trucks."

Google began testing Project Loon -- which launches transmitters under high-altitude balloons to provide large rural areas with low-cost broadband -- in February last year in Sri Lanka after reaching a spectrum deal with the government there.

Its balloons float 20km high in the stratosphere.

Google had stationed a launch location for its Project Loon balloons in Puerto Rico in February last year, earlier this year saying it would use this launchpad to send balloons over Peru to provide coverage after mass flooding.

"In response to the recent flooding in Peru, Project Loon has been working together with Telefonica and the Peruvian Government to deliver basic internet connectivity to tens of thousands of people in affected areas around Lima, Chimbote, and Piura," Project Loon said in May.

"In March, Peru was battered by extreme rains and flooding, with the government declaring more than 800 provinces to be in a state of emergency. Terrestrial communications infrastructure was severely impacted in many communities, leaving people unable to communicate."

Google said its wind-predicting algorithms helped to help keep its balloons aloft in Peru's airspace for 98 days during a test last year, ensuring they were not carried away by air currents.

Updates to Loon's navigational system had applied machine learning techniques to the flight data collected for the purpose of predicting wind directions at different altitudes.

"From our millions of kilometres of test flights we've been able to develop sophisticated models that allow us to more accurately predict the wind patterns at different altitudes. Using this data, our software algorithms are able to determine which altitude has a wind pattern that gives us the best chance of keeping our balloons close to the areas where we want them," Project Loon said at the time.

"When a wind pattern couldn't be found to keep the balloon over land, our algorithms picked the next best option, sending the balloon drifting out over the Pacific Ocean to pick up easterly winds that could help it sail back into position. In total, the balloon managed to spend 14 weeks in Peruvian airspace, which required making nearly 20,000 separate altitude adjustments during its flight."