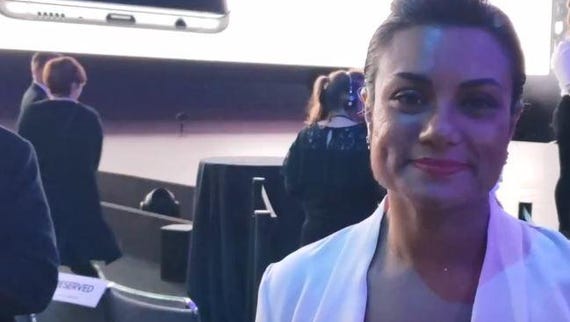 A video published by Samsung gives us some clues regarding more features and capabilities of the upcoming foldable smartphone.

Last week, when Samsung announced the Galaxy Fold, the company walked the audience through a few demos on stage and that was about it.

After the event, in the demo area where Samsung had four different Galaxy S10 models, along with the Galaxy Watch Active on display, the Galaxy Fold was nowhere to be found.

I asked countless Samsung representatives where I could find one, just to use even if for a minute, and was told the only model present at the event left with Samsung President DJ Koh.

On Monday, Samsung published a somewhat lengthy video showing the Galaxy Fold in use. In the silent video, we see the Fold and its three rear-facing cameras used and the front-facing camera used in open and closed situations. Some other interesting items I noticed:

The video then ends with a quick nod to Samsung DeX as the Fold is hooked up to an external monitor. I talked with Samsung's Suzanne De Silva, director of product marketing and strategy, after the Unpacked event who confirmed that the Fold would work with DeX and a Bluetooth keyboard and mouse combination for a PC-like experience.

Lastly, Samsung appears to have the Fold on display in Barcelona at Mobile World Congress, albeit behind glass. It's more than we saw last week, and I think I know why.

Look at the photos posted on Twitter by PhoneScoop editor in chief Rich Brome. The display has an obvious crease in it. Is that sign of things to come? Let's hope that the units on display are early builds that will have any creases ironed out by the time April 26 comes around.

Join Discussion for: Here's our best look at Samsung's Galaxy...