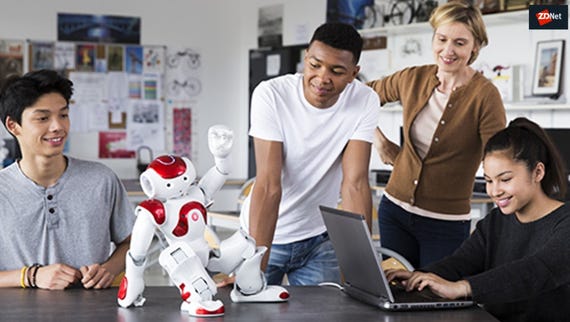 If you've read absolutely nothing about CES this year, this may come as news: There are robot pole dancers in Las Vegas this week.

More likely, you've already heard about them. They've certainly struck a chord. I have the text messages to prove it.

The gist is that there's a strip club in Las Vegas where CES attendees are flocking to check out the novelty of robot pole dancers.

But the version of the story you're getting probably varies according to the source. You may have read that the robot dancers offer a glimpse into a future of robot-human cohabitation, when even the bedroom isn't off limits for automation. That narrative fits with the spate of recent news about new models of sex robots like Harmony. Indeed, if 2017 had been your typical humdrum anum, it might have been remembered as the year of the sex robot. (I have a hunch it will be remembered for other reasons.)

Or maybe you've read criticism that the strippers (people are calling them that, though they really don't shed clothing) are just the latest indication of the misogyny that's rampant in tech culture. This critique seems especially fitting at the height of the #MeToo movement and in light of the uproar following the announcement of an all-male keynote lineup for the conference (the Consumer Technology Association (CTA), which runs CES, responded with a muted mea culpa and added some women to the lineup). Twitter is now abuzz with variants of #CESSoMale.

Or maybe you got the business angle. Entrepreneur lauded the Sapphire strip club -- a private business that has no affiliation with CES -- for its marketing savvy.

None of those takes is wrong. The robot dancers are a peculiarly on-the-nose statement about our growing lust for technology, a tactless affirmation that many truly do wish to keep technology a boys' club, and a genius publicity move by a savvy off-Strip sex peddler.

They're also art, the work of Giles Walker, a 50-year-old installation artist and sculptor from England. Walker's kinetic installations are mesmerizing, beautiful, and hideous all at the same time. One piece, called Last Supper, consists of 13 shrouded robotic figures moving eerily around a table.

Walker conceived of the robot dancers as a commentary on voyeurism and the surveillance state. The robots' heads are CCTV security cameras. Most artists don't get seed funding or stock options, so to make ends meet Walker rents the robots out for money. When the Sapphire Gentlemen's Club wanted to install them during CES, he agreed.

He feels a bit conflicted about the reactions and the arena for his creations. He recently told Recode: "I didn't build these to get involved in the sex industry. They weren't about sex, they were about voyeurism."

Like the best art, though, the robots have a dimensionality their creator didn't fully intend. Accolades and controversy have followed. So, too, has a much-needed note of introspection in a frenzied week of blushing, at times blind, exuberance over technology.

Join Discussion for: Here's the deal with those robot pole dancers...