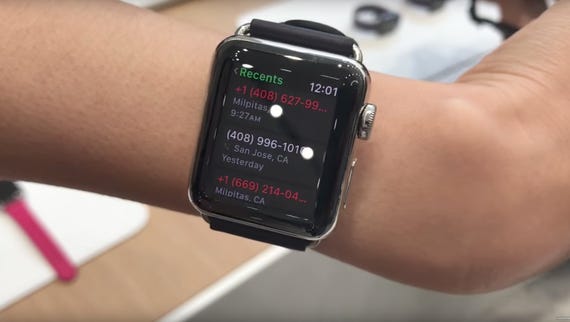 Apple announced the updated wearable at the inaugural event for Steve Jobs Theater in Cupertino, Calif., on Tuesday.

With cellular connectivity included, the watch can receive emails or messages, and it can receive or place calls without an iPhone nearby. Previously, the Apple Watch required a Wi-Fi or a Bluetooth connection for connectivity.

Apple Watch Series 3 users won't have to sign up for an additional phone number specific to the watch, as is the case with Android smartwatches that connect to wireless carriers.

In the US, all four major carriers have announced the Apple Watch Series 3 will work on their respective networks. AT&T will give users the first three months free, after which it will be $10 a month for the watch to access its network, sharing the wireless plan the user is on. Verizon Wireless will offer three months of free service for Apple Watch Series 3 users, after which it will cost $10 per month. T-Mobile and Sprint have yet to announce monthly pricing.

To be clear, users who purchase the Series 3 model with cellular connectivity are not obligated to activate it on a wireless plan.

Apple CEO Tim Cook started the Apple Watch portion of the keynote detailing a 50-percent growth last quarter when compared to the same time last year. Cook also boasted the Apple Watch is the top selling watch in the world and has a 97-percent customer satisfaction rating.

A faster processor, improved Wi-Fi and Bluetooth chip, and a display that doubles as an antenna, are all inside the same size of housing as the Apple Watch Series 2.

On the outside, apart from red highlight on the digital crown, the Apple Watch Series 3 looks identical to its predecessors.

Update: This post has been updated to include carrier pricing.

Why I'm now using Android and might skip the iPhone 8

Circumstances caused me to change to Android handsets as my daily driver instead of my iPhone 7 Plus. Now I'm not sure I want to go back.

What to expect from today's Apple event: iPhone X and more

Apple is poised to announce the iPhone X, two other iPhones, a new Apple TV, and more at its launch event in Cupertino. Here's everything we expect -- and what we still don't know.

Apple's iPhone 8, iPhone 8 Plus, iPhone X to kick off mainstreaming of augmented reality

Toss in iOS 11 and ARKit and Apple is about to set off a developer race to create consumer and business augmented reality apps.

Join Discussion for: Here's what you need to know about the new...