Full Bio
Posted in Between the Lines on February 2, 2018 | Topic: Internet of Things 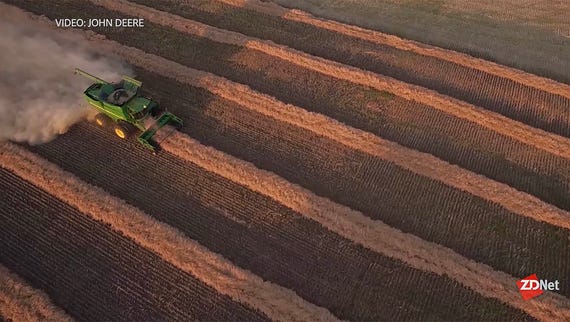 How 5G will impact the future of farming
Watch Now

Video: How 5G will impact the future of farming

At 180 years old, John Deere has become a household name that conjures images of farmland, tractors and rural America. But what's less known about the iconic company is that it's become a leading tech innovator in the precision agriculture space, and in many ways, serves as an example of how every business is digital.

A year ago, John Deere bought a Silicon Valley-based artificial intelligence (AI) startup called Blue River, and it's now working to incorporate machine learning, deep learning, and robotics into the brains of its farm equipment.

The goal is to use automated driving technology, computer vision, telematics, and cloud-based mobile applications to help farmers double or triple their yields -- a feat that will be key to keeping up with global food demands as the Earth's population grows over the next thirty years.

"And to feed those people, there's different estimates out there, but we probably need to increase current production by 70 percent. That's not very long away when you look at the number of years it takes to develop the type of equipment and technology we need. It's a real race."

This is where 5G technology comes in to play.

What is the IoT? Everything you need to know about the Internet of Things right now | 5G takes center stage at CES 2018 with actual deployments later | TechRepublic: 5G mobile networks: A cheat sheet | The 5G revolution: 3 things business leaders need to know

The term "5G" refers to the fifth-generation wireless broadband technology that will bring speed and coverage improvements from 4G, with low-latency wireless up to 1GB/s.

The idea is to have farm equipment that's able to communicate with other machines on the field by streaming data from vehicle to cloud and back down to machine operators in the shortest time possible.

"So you might have two combines in the same field harvesting the same crop," said Julian Sanchez, director of the John Deere Technology Innovation Center. "Right now we have to assume there will be 30 to 60 second delays in communications between these combines while they upload data to the cloud, have it processed, and downloaded to the other combine so they can share information."

With 5G, Sanchez said communication between those two combines, through the cloud, could be cut down to less than one second. Consider this scenario: There are two combine tractors active in the same field, but only one of the operators really understands the condition of the field and how to set up the combine accordingly. Real-time connectivity would mean that the more experienced combine operator could send optimization details to the other combine so that both machines are functioning at their peak.

"There are a number of reasons, especially around the settings of the machine, for why you want that real time communication, as well as implications of having machines in the field with other machines helping with logistical applications of farming," Sanchez said.

Of course, there are vast infrastructure challenges to reaching this kind of connectivity utopia in America's heartland. Cable giant Charter, for instance, announced recently that it's testing 5G wireless in an effort to provide "wireline-like broadband connectivity and speeds" to customers in rural communities. But the company cautions that 5G wireless will likely struggle in rural areas, particularly ones with lots of trees and foliage, and could encounter other issues due to low population density.

See also: Big Data is a chicken-or-egg scenario on the farm

The challenge for a company like John Deere is convincing network operators and regulators that there's value in spectrum that provides broadband in rural areas. Fortunately John Deere isn't the only company advocating for gains in rural connectivity.

Microsoft is pushing "white spaces" spectrum with the Federal Communications Commission, positing that the bandwidth -- which gets its name from its origin as the unused spectrum between TV channels -- could enable wireless signals to travel over hills and through buildings and trees.

"Microsoft's research and community deployments have shown that white spaces technology is a very effective tool for expanding existing broadband networks into unserved or underserved communities," the company wrote in a letter to the FCC last July. "This is because white spaces technologies use a frequency band that permits network operators to extend wireless broadband signals significantly farther than other bands, while requiring less infrastructure and increasing affordability."

"As a result, with white spaces technologies, providers can expand their networks to serve communities where existing technologies are economically impractical to deploy."

The pitch for rural 5G takes on more global significance when you factor in the need to boost crop yields. Developments in precision agriculture could prove vital to feeding the Earth's growing population, but the technology can not exist effectively without the infrastructure to support it.

And though we're still years from realizing the true potential of rural 5G, John Deere plans to continue making advancements to farm technology -- just as it's done for more than a century -- until telcos and regulators catch up.

Join Discussion for: How 5G will impact the future of farming...