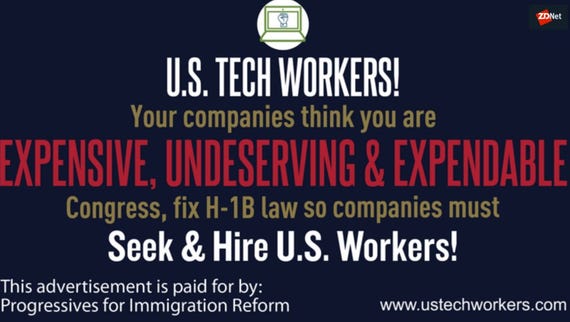 Reuters recently published an article that rocked the IT community in India and the US.

It stated that, according to two Indian officials who preferred to remain anonymous, the US was in internal discussions to slap a debilitating punitive cap on H-1B visas issued to India.

The H-1B visa is a six-year work visa given to skilled professionals to work in the US. In the past, Indians have received 70% of them, but there have been many arguments that suggest that many of these have been obtained by gaming the system. President Trump has been on a warpath to correct what he thinks is the swamping of US tech jobs by foreigners and has made scrutiny during the application process far more intense and the qualifications stringent. As a result, rejection rates for Indians have gone from 5% to a sky-high 36%. Now, these caps would serve as the coup-de-grace for Indian IT.

"The proposal is that any country that does data localization, then it (H-1B visas) would be limited to about 15% of the quota. It's being discussed internally in the US government," the Reuters source said.

The cap, if it were applied, would be a reprisal for a spat between the US and India regarding data localization. Last year, the Indian government under the helm of Prime Minister Narendra Modi introduced rules that forced foreign companies like Visa and Mastercard to store all its payment information on Indian servers citing national security as a reason. As we all know in an oft-repeated, eye-glazing mantra, "data is the new gold" and President Trump was duly enraged, despite all the supposed bonhomie and bear hugs taking place between the two authoritarian leaders. In fact, India and the US have been engaging in a tit-for-tat tariff war a few days ago, and Uncle Sam just eliminated India's preferential trade status.

As it turns out, Mike Pompeo, Trump's secretary of state, visited Narendra Modi a few days ago on a state visit and soothed anxieties about an impending H-1B-cap-induced armageddon by denying any such action or deliberations on the same. But this wouldn't be the first time in either country that such policies were reversed quickly. Perhaps the rumours were intentionally planted to serve as a warning shot above the bow.

Yet, there is much speculation on whether Trump will in fact be able to enforce a cap. Apparently, according to a Times of India article that surveyed lawyers knowledgeable about the issue, rule-setting for visas happens in Congress, and a Democrat-majority Congress is not even remotely inclined to green light such legislation. However, another suggested that approval from Congress may not be required if the total number of visas remained the same. Fortune Magazine points out that, either way, the move would violate the US Immigration and Nationality Act that prohibits discrimination against any one country when doling out visas.

In other words, the jury is still out.

Meanwhile, Quartz mentioned that no other bedrock of American employment numbers than the US Bureau of Labor Statistics has projected 1.4 million more software development jobs in the country than candidates who can plug that hole. It also mentions a Korn Ferry study that suggests a $162 billion vaporization of revenues in the tech sector by 2030 if it can't grab on to more high-tech workers.

Yet, these prognostications may not save the H-1B, especially for Indians.

Join Discussion for: India rocked by rumors of H-1B caps, but...