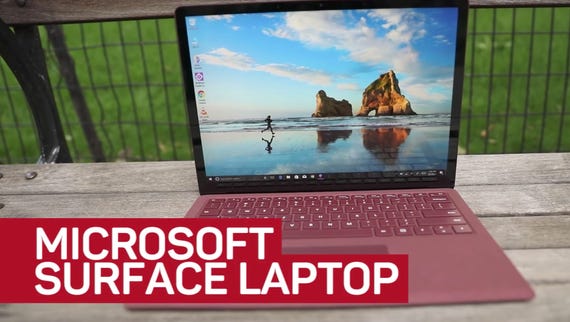 Microsoft's fabric-covered Surface Laptop is cut from a different cloth

The iFixit team is impressed by Microsoft's new Surface Laptop and Surface Pro. That is, impressed by the fact that the devices are "so much worse than we expected."

So, what did the iFixit team not like about Microsoft's latest crop of devices? Well, it all comes down to repairability, or the lack thereof.

After being pleasantly surprised by the upgradability of Apple's new iMac (even though that device scores pretty poorly on the repairability front, and was described as being "distinctly un-fun to open"), the iFixit team seem to be shocked to discover how unrepairable Microsoft's new devices are.

"No matter how hard you try, you'll never be able to fix or change them (unrepairable and non-upgradable)," is how the company described them in a statement to ZDNet.

The Surface Laptop was described as "a glue-filled monstrosity" that "literally can't be opened without destroying it" because the components are "hidden under adhesive and plastic spot welds" while the Surface Pro was found to be "nearly identical to its predecessor--aside from ditching the last remaining upgradable component, the modular SSD."

Now not many buyers will care about repairability (part of the reason why modern devices are so hard to repair), but that lack of a modular SSD in the Surface Pro means that there is no way to recover data from a bricked device.

But the teardown did reveal some positive changes.

The Surface Pro gets a battery boost to a four-cell, 45 Wh unit, up from a two-cell 38.2 Wh battery in the Surface Pro 4, has a redesigned hinge to give it an extra 15 degrees of range, up to a 165-degree angle, and has an upgraded cooling system and redesigned cooling vents in the case.

Coming to the Surface Laptop, apart from the layout of the ports, it's surprisingly similar (externally) to Apple's MacBook Air, with the biggest difference that it trades a second USB port for an SDXC card reader. The heat dissipation system also looks very beefy, and can dissipate heat from both sides of the motherboard.

So what does this mean? Well, the bottom line is that any damage, even slight damage, is probably going to put both the devices out of action, and it's unlikely that it can be fixed. If that's something that worried you, then it's worth bearing in mind. If not, then don't worry about it.

Join Discussion for: Inside Microsoft's Surface Laptop and Surface...