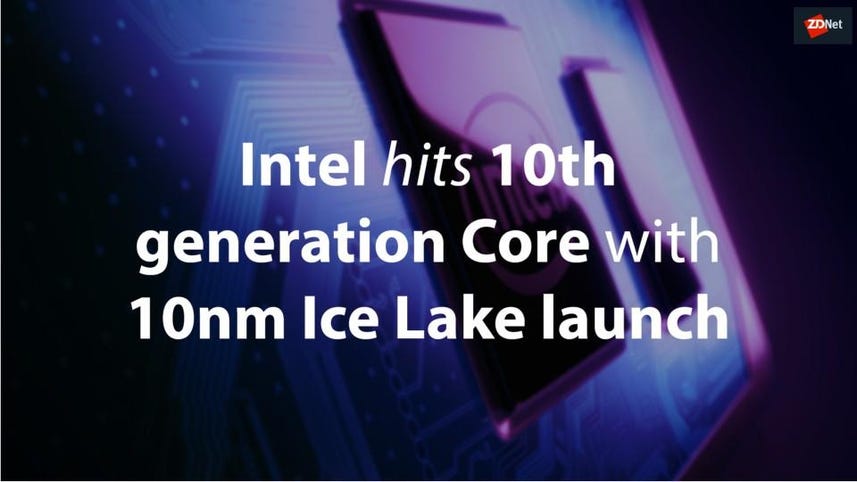 The days of Intel being stuck on 14nm fabrication technology for desktop chips is over as the chip giant launched its 10nm Ice Lake architecture on Tuesday at Computex.

The 10th-generation Core processor is shipping to OEMs in i3, i5, and i7 variants, and arrives with its Gen11 graphics engine, deep learning boost, a Gaussian Network Accelerator for low-power AI tasks, as well as integrated Wi-Fi 6.

Intel has touted its Gen11 graphics as being twice as good as Gen9, with the deep learning boost being just shy of nine times better for inference tasks than "comparable products on the market".

Systems built with Ice Lake are expected to hit shelves around Christmas time.

Also arriving at the end of the year will be Intel's Project Athena devices, first foreshadowed at CES in January.

Intel released its Project Athena specification today, which states that systems need to be able to wake from sleep in under a second, and have battery life capable of 16 hours of video playback.

At the same time, Intel also announce 14 different new versions of its 9th-generation Core chips with vPro intended for mobile and desktop PCs, as well as 14 new Xeon E processors for workstations.

On Monday at Computex, AMD announced the line up for its third-generation Ryzen processors, with the chips to be built on 7 nanometre technology.

"That's half the price of our competition with much, much more performance," AMD CEO Dr Lisa Su said.

Fending off Zombieload attacks will crush your performance

To fully protect yourself from potential Zombieload attacks, vendors and early benchmarks show you'll face performance losses of up to 40%.

Intel's own Clear Linux distribution has a new installer and a developer edition for x86 programmers. Intel is also doubling down on securing popular open-source projects and offering new open-source AI and deep learning and data analytics software developer stacks.

The results come a week after Intel lost Apple as its primary 5G customer and subsequently shuttered its 5G wireless chipset business.

After many production issues, Intel finally released another processor built on 10nm designs, and made moves in the 5G modem and base station market.