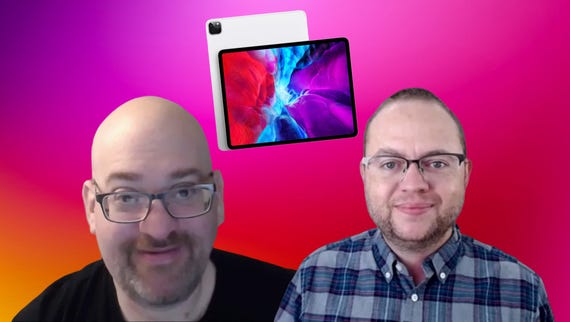 Apple has put a lot of effort into establishing the iPad as a credible business tool in recent years, but has vacillated over the question of whether the device is, or isn't, a 'computer'. Now, with the announcement of the 2020 iPad Pro, with its trackpad-equipped Magic Keyboard, the company seems to have finally come down on the 'computer' side. But of course, being Apple, the message is that this is no ordinary computer.

Apple's new iPadOS 13.4 device -- and particularly the larger 12.9-inch model -- is now closer than ever in spirit to Windows-based detachables such as Microsoft's Surface Pro 7 -- and the OEM equivalents that it inspires -- in terms of industrial design, features and potential use cases.

Although platform loyalty will probably remain the primary criterion for buyers, it's instructive to take a detailed side-by-side look at the specifications of the new 12.9-inch iPad Pro and the 12.3-inch Surface Pro 7, explore the use cases those features suggest, and compare the prices.

Neither device comes with a trackpad-equipped keyboard nor a stylus as standard -- arguably prerequisites for a 'computer' capable of a broad range of business and creative tasks. To get a clearer idea of comparative pricing, here's the costing for configurations of roughly equal capability:

The top-end Core i7 processor was used for this comparison, which shows the 2020 iPad Pro coming in just over $150 cheaper than the Surface Pro 7, because Apple claims that the new A12Z Bionic chip makes the iPad Pro "so fast it outpaces most PC laptops available today". The previous-generation A12X Bionic in the 2018 iPad Pro is certainly a match for the Core i7:

Although full details of the new Apple chip are not yet available, the main difference between the A12X and A12Z is the addition of an eighth GPU core (up from 7). That's borne out by early benchmarks, which show similar CPU performance and a modest improvement in GPU performance.

Microsoft offers a much wider choice of CPUs, ranging from Core i3 through Core i5 to Core i7, with 4GB, 8GB or 16GB of RAM. Apple's iPad Pro is one-size-fits-all in this respect -- A12Z Bionic and 6GB. Both devices offer the same spread of internal storage -- 128GB, 256GB, 512GB or 1TB -- but the Surface Pro 7 also supports expansion via a Micro-SDXC card reader. Graphics performance from the A12Z Bionic's 8-core GPU is likely to exceed that of Intel's integrated Iris Plus Graphics (Core i5, i7), but this remains to be tested.

Apple has always had a strong following in the creative/graphics sector, and that's evident in the displays on the two devices. Although both screens are IPS LCD panels of similar size (12.9 inches for iPad Pro, 12.3 inches for Surface Pro 7) and resolution (265ppi vs 267ppi), Apple's tablet goes brighter (600 nits vs 400 nits), has a variable refresh rate up to 120Hz for smoother scrolling compared to a fixed 60Hz for the Surface Pro 7, and supports the wide-gamut DCI-P3 colour space. Apple's automatic display adjustment technology -- True Tone -- is also superior as it measures both brightness and colour temperature, whereas the Surface Pro 7 just has an ambient light sensor.

When it comes to wired connections, the Surface Pro 7 is better equipped, with USB-C, USB-A and a 3.5mm headset jack compared to just USB-C on the iPad Pro. The Surface Pro 7 also has two proprietary ports (Surface Connect and Type Cover) to the iPad Pro's one (Apple Smart Connector). If you want USB-A or 3.5mm connectors for your iPad Pro, you'll have to pay extra for USB-C adapters.

The iPad Pro wins out on the wireless front, offering wi-fi (802.11ax), Bluetooth 5, GPS, 4G LTE and UWB (UltraWideBand) -- although the latter, via Apple's U1 chip, has not been officially confirmed. UWB can support accurate indoor spatial positioning and high-bandwidth data transfer. The Surface Pro 7, by contrast, is limited to wi-fi and Bluetooth.

The camera contest is a clear win for the iPad Pro, which has a 7MP TrueDepth front camera and two cameras at the back -- 12MP wide-angle and 10MP ultra-wide-angle. But the main talking point is the addition of a LiDAR Scanner, a time-of-flight sensor that delivers accurate depth information about the scene in its field of view. This will greatly enhance augmented reality (AR) applications, among other things.

The Surface Pro 7, by contrast, has a basic camera setup: 5MP at the front and 8MP at the back.

Both devices support facial authentication via the front camera, but only the Surface Pro -- via the optional $159.99 Type Cover -- offers a fingerprint reader as well.

The 2020 iPad Pro and Surface Pro 7 both offer capable optional add-on keyboards with built-in trackpads, but Apple's new Magic Keyboard arguably has the edge in terms of industrial design. The tablet attaches magnetically to a 'floating cantilever' mechanism that allows for flexible positioning; you also get an additional USB-C port for pass-through charging. The Magic Keyboard looks impressive on paper, but we can't comment on the typing experience yet, and it does have a premium price tag ($349, available from May).

The Surface Pro 7's $159.99 Signature Type Cover provides a decent typing platform, and is available in a range of colours. But of the two keyboard designs, Apple's is likely to be the most convenient to use in cramped spaces such as an airplane tray table.

Low-latency pressure- and tilt-sensitive pens are available for both devices, the 2nd generation Apple Pencil costing $129 while Microsoft's Surface Pencil comes in at $99.99. Neither has a home on the device, attaching magnetically instead.

Both devices make similar claims for battery life: 10 hours from a 36.7Wh battery for the iPad Pro and 10.5 hours from a 45Wh battery for the Surface Pro 7. In practice, though, given the types of workload likely to be running, and the fact that the 7nm Arm-based A12Z Bionic is a more power-efficient processor than the 10th-generation Core i7, it's likely that Apple's tablet will win out when the benchmarks are in.

With the addition of trackpad and cursor support in iPadOS 13.4, the 2020 iPad Pro undoubtedly moves closer to a 'computer' experience, if not a mainstream one. If you're already happy using the iPad, you should be able to do your stuff quicker and more ergonomically on the 2020 iPad Pro. But will it tempt professional Windows 10 or macOS users to get on-board, given the premium pricing? That's another matter, despite its appealing industrial design and impressive specifications.

Look out for a review of the new iPad Pro on ZDNet shortly.