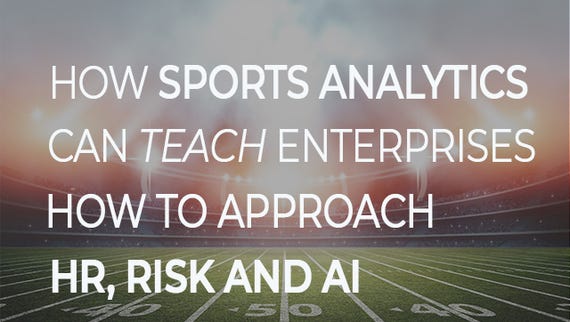 How sports analytics can teach enterprises how to approach HR, risk and AI
Watch Now

SAP and the San Francisco 49ers have rolled out an effort called Executive Huddle that serves as a data hub and stadium operations system to boost the fan experience.

The system is the backbone of a digital boardroom at the stadium that tracks in-venue operations across nine data sources including attendance, parking, food and beverage, retail, weather, ticketing and social media. These metrics are aggregated by SAP's Leonardo, Cloud Platform, HANA Database and Analytics Cloud.

Moon Javaid, vice president of strategy and analytics for the San Francisco 49ers, said the stadium experience is increasingly critical since NFL fans have other options. "The at home experience is so great that we wanted the in game experience to be the best," he said.

Javaid said the 49ers previously relied on surveys to gauge the customer experience, but the data was too old to enable mid-game corrections. At the end of 2016, the 49ers began to incorporate more real time data including Happy or Not buttons throughout the stadium.

For NFL teams, adjusting in real time to data is a challenge given there are only 8 regular season games to deliver a good experience. The NHL, NBA and MLB can all garner more data on the customer experience due to a much larger slate of games.

Via Executive Huddle, the 49ers get streaming data that can avoid customer problems such as when a parking lot fills up too early. "It's really triage where we're identifying potential challenges and get the right stakeholders and the right person to solve," said Javaid.

The data sample derived from a short NFL season means that Javaid may need 5 years of data to see real correlations. "We try to be data smart not data rich. We have our 9 streams but could have as much as 20 or 30, but don't know if we'd have a good use of the data streams yet," he said.

SAP's Mark Lehew, global vice president of sports and entertainment at SAP, said the 49ers will be able to correlate in-game events and time stamps to gauge consumption and satisfaction changes. "The NFL game and weather feeds allow us to see correlations and impact," explained Lehew.

Moon said fan satisfaction is clearly affected by the game and wins vs. losses. "We understand fan feelings and how we are going to be rated portly on every dimension across the board," said Moon. With more data, the 49ers should be able to be smarter about alerts and whether there are true issues or just a reaction to a bad game. "When you loose the hot dogs are getting colder and the beer gets warmer," said Moon.

While Moon has a ton of operational data, it won't be merged with player analytics, he said. "Player analytics and fan experience are different challenges," said Moon. There is an annual survey that yields data on the direction of the team, fan feelings and thoughts about the organization. Those insights can be used to figure out what players should deliver messages and get promotions on the video board as well as move jersey sales.

The Executive Huddle took 3 months to set up and didn't need integration with SAP's ERP platform. About 30 percent of Executive Huddle had to be customized to the 49ers' requirements, said Lehew. "The Niners were advanced with analytics to begin with and knew what data is essential," he said.