Part of a ZDNet Special Feature: Sports Analytics: What Business Can Learn 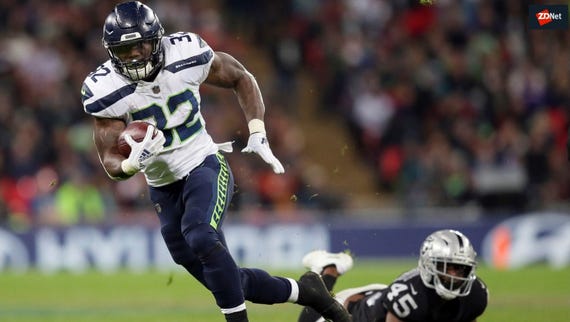 Behind the excitement and razzmatazz of the NFL London Games in Wembley Stadium lies a new technical reality -- connectivity and data is helping to bring a higher level of understanding to coaches and fans about how players are performing.

ZDNet went behind the scenes at the recent Seattle Seahawks versus Oakland Raiders matchup in London to see how Zebra Technologies is tracking and tracing player movements. Zebra has embedded RFID tags in players' shoulder pads to analyse movement, providing metrics such as player speed, distance travelled, acceleration, and deceleration.

"It's one thing being able to measure a 40-yard dash by a player with a stopwatch -- that's pretty simple to do," says John Bacon, director of operations for NFL's Next Gen Stats at Zebra Technologies. "But if you need to do that for 22 people simultaneously, well that would take an army at best -- even if you could do that. The technology provides the capability to track the position of every player at all times within inches."

The Zebra system tracks every player 25 times a second. The RFID chips in the shoulder pads record and transmit data on player movement via an ultra-wideband tracking system, and this data is received by data professionals in the stand who turn information into insight by ensuring the data points are attached to the right plays.

Bacon says strength and conditioning coaches across the NFL have been some of the early beneficiaries of the system. A growing number of teams use the technology to track player performance in practice as well as during game day. This information helps ensure coaching choices are based on empirical information, rather than subjective assessments.

"Coaches can understand how their players are performing through the week," says Bacon. "They can look at whether a player, who might be recovering from injury, is up to speed and playing at the level that they would expect. That's important -- teams invest a huge amount of money into game day and it's crucial they know the right time to put a player into the action."

Teams competing in a match receive full sets of data for their own side and the opposition within hours of the game finishing. This is a new feature for this NFL season and it could have far-reaching implications in terms of performance monitoring, says Bacon.

"Teams can start evaluating how players performed and what particular match-ups looked like. So, it's valuable in terms of take-aways from the match but also if they happen to play the opposition again later in the season," he says.

Bacon says NFL and Zebra continue to receive feedback from teams and coaches on the information they'd like to receive. "It's really a matter of the clubs working out which data is valuable for them and working out how they're going to apply that knowledge once they have it," he says.

"We've collected a tremendous amount of positional data, as well as event data on the players. That information is turned into the product the NFL calls NextGen stats. Those metrics can be consumed by everyone, from the fans, the broadcasters in the press box, and the teams."

The NextGen platform isn't just focussed on the creation of post-game insight. Zebra's technology also generates real-time data. Broadcasters and fans can use this information to develop a deeper understanding of the finer details of the game, such as how fast a wide receiver is running when they catch a pass from the quarterback.

Connected technology is producing game-changing insight for teams and supporters alike. The power of information is recognised by Andrew Uhm, senior software engineer with the NFL.

"The system is providing information to coaches to help with their game plans and to fans to help them enjoy the game in different ways. We're able to put numbers to plays and boost understanding of the game," he says.

"A lot of fans are really engaged with the executions that have been put together. They're starting to be able to see what kind of influence a player has in the game -- and why that impact matters, such as being able to run a particular type of route cleanly."

Bacon says Zebra has honed its approach carefully. His team spent considerable time testing the manufacture and mounting of devices to ensure hard hits during the game don't create faulty readings. "We want the technology to be out of sight and out of mind for the players," he says.

Zebra's RFID technology has already been proven in other industrial environments, including healthcare, retail, manufacturing, and transportation. The firm started evaluating the tracking technology at matches during the 2013 NFL season.

The RFID system was implemented across the league during the next two years. Every player in every game has been tracked since the 2015 season, helping to create a database of player performance information.

Bacon says Zebra and the NFL continue to explore how connected technology can be used to aid decision making. Zebra has recently worked alongside Wilson Sporting Goods to insert RFID tags into footballs. This tagging supports the collection of real-time location, speed, and rotation data for footballs. Once again, testing has been rigorous.

"Changing the dynamics or weight and balance of a ball would be frowned upon," says Bacon. "We had to make sure we passed the standards. And we did intensive testing and engineering cycles across a two-year period."

The tag weighs under 4 grams -- approximately 1 percent of the weight of the ball -- and is inserted during the manufacturing process. The placement of the tag does not affect the movement, shape, or feel of the ball.

Coaching staff at NFL teams can use the data to improve performance. New Orleans Saints, for example, are exploring how information collected by the tagged footballs in practice can be used to hone quarterback and special teams play.

Bacon says RFID tracking could spread into other areas of the sport. Zebra has started giving tracking devices to officials. The NFL is using this data to track on-field operational activities and to help ensure officials are in the right place during plays.

"There's other assets that can be tracked and that information helps the NFL. Once the receiver network is up and running, it's a matter of working out what information might be valuable and finding out the right tagging mechanism to source that data," says Bacon. 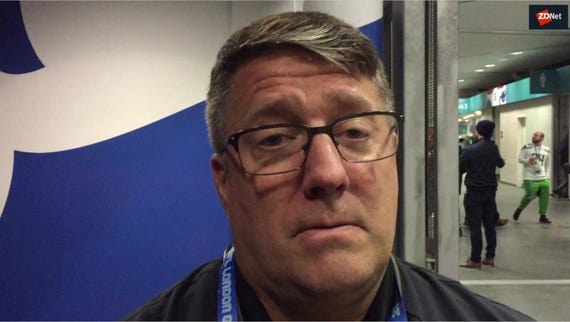 NFL in London: How data and technology are changing sport
Watch Now

Wimbledon: How AI, chatbots and big data help serve up a winning experience

How Wimbledon uses cutting edge tech to make sure fans get the most out of the tennis tournament.

The case for business model innovation: A sports story

Once again, sports strategist Stephen Bourke makes the case for business model innovation in sports -- that applies to everyone and everything.

The National Football League is teaming up with Sleep Number to help its players use big data and machine learning to improve their sleep and boost performance.

5G for golf: Intel and Fox Sports work on US Open broadcasts

Intel, Fox Sports, Ericsson, and AT&T discuss how they used a US Open golf broadcast to iron out 5G in media.

Go behind the scenes with the president of an NHL hockey to learn about customer experience and why building community is crucial.

Got a bold prediction about the Monday night NFL matchup? Tell Alexa, and you could win your way into a free FanDuel tournament worth real cash.

Join Discussion for: NFL in London: How big data is helping to...